Posted on September 9, 2011 by LivinginPeaceProject

Off the Top of my Head: Karamea Radio 1-Year Anniversary 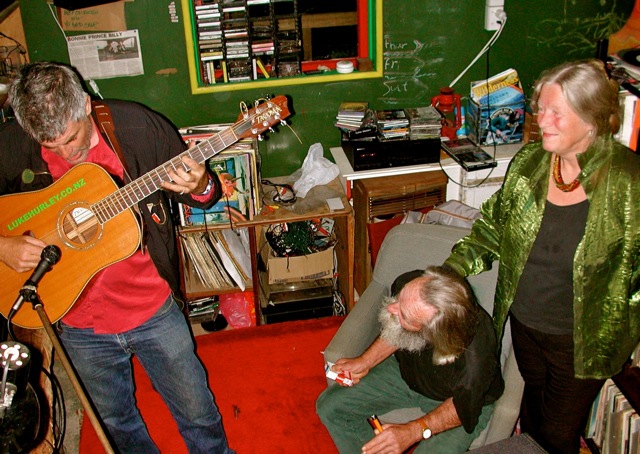 September 26, 2004 marks the first anniversary of Karamea Radio 107.5 FM, which means the community radio has been broadcasting non-stop (bar a few technical hiccups and the odd power outage) for more than 8,760 hours.

From its humble beginnings at James and Raramai’s “Old Bike Shop” building on Bridge Street to its current location in the old ambulance bay behind Rongo Backpackers & Gallery on Waverley Street, the radio station–and the people who run it–have overcome poverty, equipment failure, technical ineptitude and finite musical archives to continuously transmit an eclectic range of fabulous audio entertainment for the Karamea community.

Craig Stenhouse, James Rae and Stu Mollison were the instigators of the radio station and their vision for the station was realised through their passion for the idea, a lot of hard work and the generosity of the Karamea community, who donated money to purchase a transmitter as well as much of the music and station equipment we still use today. Special mention must be made of the contribution made by Cab in Little Wanganui, who provided a 25-stack CD player, which enables us to play at random 25 different CDs repeatedly all night until the morning DJ arrived to change the tunes. Judith and Norman Stopforth donated many fabulous old records, as did Peter Churchill and Tex Franken and Brian Thomson took the station to a new level with the donation of a laptop computer to store and play the station’s extensive library of music.

Operation of the radio station equipment is surprisingly easy and after some simple instructions, aspiring DJs can begin broadcasting their own material and soon become masters of the decks. Many locals have risen to the Karamea Radio challenge and come down to do their own shows. Tjalve Mollison-Sjoberg, alias DJ-T, plays music every week as well as occasionally reading the news on air. His father Stu has a huge collection of classic records and CDs and is a consummate purveyor of alternative, forgotten and rare tunes. Jethro Davidson-Linnaker occasionally drops in to play narrated children’s stories on air and Cody Wilkinson, Callum Moynihan, Dave Bateman, Simon Vos, Matthew McNabb, Leila and Willis MacBeth, along with the Rongo Crew of Sage, Brian, DJ Crap, Mette, Cath and Tristan are regular performers on Karamea Radio.

Last December, Sylvia Raikes and Alysha Harmon led us into the festive season with Christmas music from around the world and read out lists of good deeds done by Karameans throughout the year––a great idea that embraced the concept of community spirit and community radio.

Poet Sam Hunt and blues guitarist Paul Ubana Jones are two of the N.Z. celebrities who have dropped in to Karamea Radio to say hello to the community over the airwaves and the station also broadcast the world premiere of a German punk bands new album––the musicians just happened to stay at Rongo last summer.

Karamea Radio is non-commercial and has been established by the community for the community, there is no advertising, no sponsorship and no censorship; it is truly free radio, which is very rare in this highly regulated world. Many international visitors, Germans in particular, often comment how envious they are of our radio station and how impossible it would be to establish such a station in their country.

Backpackers staying at Rongo love the radio station and many of them have MP3 players, which allows them to carry their favourite music with them on their travels. This is a boon for Karamea Radio as guests at Rongo can plug in their MP3 gadgets and play the latest tunes from their respective countries. The ease at which MP3 flies can be copied has enabled the station to compile a huge collection of music from the world over on computer hard drive, an archive that is growing rapidly and covers a broad spectrum of musical genres.

As a result, Karamea Radio has probably one of the most contemporary and international play lists of any radio station in the world.

Karamea Radio has made great progress in its first year, but to maintain the growth, development and improvement of the station, additional equipment must be purchased. Main objectives include; boosting the broadcast output to enable more homes to receive the signal, purchase new computer equipment to store and play music, the building of a DJ booth around the equipment to minimise dust and sound interference and to allow DJs to do their thing without distraction.

There are also several building plans to make the radio station more comfortable, for example, the construction of a deck on the sunny north side of the building, painting and insulating the station and the installation of heating to make the chilly winter nights more comfortable.

Talkback radio would be made possible by connecting a phone line to the station, which could lead to Internet streaming and the ability to broadcast Karamea Radio on the Web so that people worldwide could tune in and listen to what’s playing on 107.5FM.

Radio is an excellent medium for entertainment and not too many years ago, sitting around the radio would have been the principal form of entertainment for many Karameans.

In its second year, the radio station will have regularly scheduled programmes that will enable listeners to tune into shows of interest to them whether it’s blues, jazz, rock’n’roll, funk, hip-hop, metal, talk-back, news reports, humour, story-telling, Broadway tunes, classical, Latin, world music or punk, Karamea Radio will continue to improve and grow to provide a valuable service to the Karamea Community.

So tune your radio to 107.5 FM and rip the knob off…if you haven’t already! 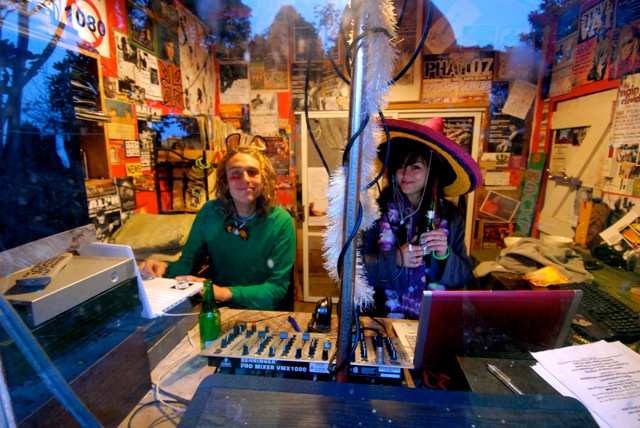