Posted on August 6, 2012 by LivinginPeaceProject

Vagabond artist, Shota Kawahara, is currently flat out preparing for a show as resident artist at Re-Invent Gallery in Lake Forest, Chicago.

Graduate of the prestigious Kyoto University art faculty, nonconformist Japanese painter Kawahara has been travelling the world for the past seven years in search of inspiration, experience and knowledge all of which he includes in his abstract reflections of life on the road.  Like travel, art is a process of self-discovery for Kawahara, “By doing art we learn many different ways of seeing and thinking,” he said.

Kawahara met his current host and fellow artist Kristin Mikrut when both were resident artists at the LivinginPeace Project in Karamea on the West Coast of the South Island of New Zealand. Mikrut returned to her home in Lake Forest north of Chicago to set up an art studio/gallery and workshop with friend Cecilia Lanyon and, recognising the depth of Kawahara’s talent, they invited him to be the first resident artist at Re-Invent. 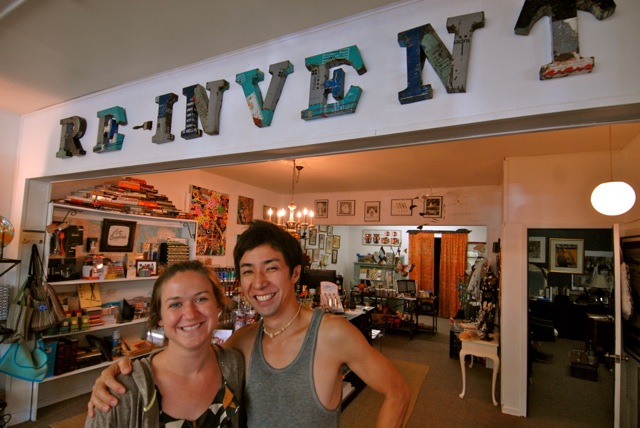 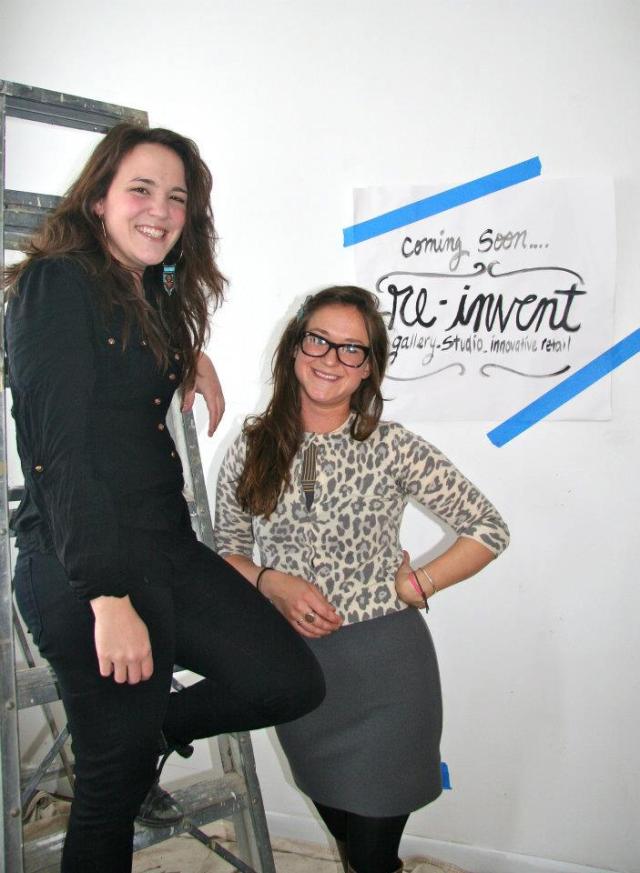 An exhibition showcasing Kawahara’s work will open at Re-Invent on August 17 and he is currently working on a raft of new material for the show. Artistic association with Mikrut has encouraged him to venture into new creative territory like installation art and sculpture and the exhibition will feature new artistic direction and style for Kawahara. 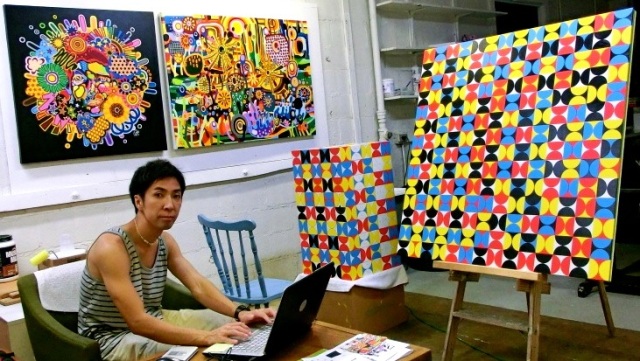 Nature is an inspiration for Kawahara and he attributes much of the content of his work to time spent in the great outdoors breathing with the natural environment, drawing in the shapes, patterns, textures and colours and recreating the organic forms on canvas. 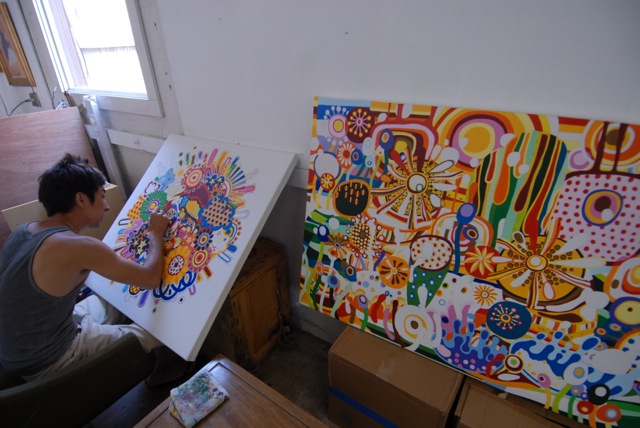 A Kawahara painting on any wall brings the joy of nature, environmental vibrancy and the wonder of life itself to a room…it elicits happiness, tranquility and harmony from the viewer. The paintings are quite busy, but interestingly, they are also rather calming as the abstract interpretations stimulate the mind and elicit introspection, imagination, bliss and serenity. “When we view the paintings, we feel something instantly, without reason,” he said, “We all have an aesthetic brain, the more we look at art, the more our brains expand.” 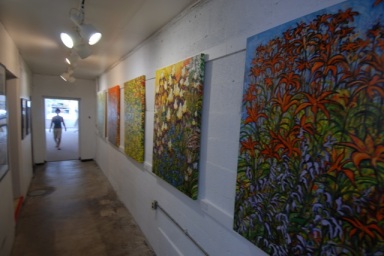 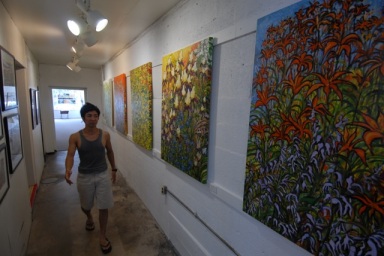 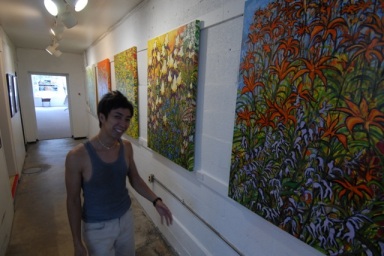 For Kawahara, painting is a cathartic and introspective process, “For me…art is similar to meditation, I feel disconnected from the outside world and art takes me to my inner world where I can focus my senses and feel more calm and at peace…I then explore myself, seeking answers and asking questions.”

“Inspiration” is the title of Kawahara’s upcoming show at Re-Invent and should you want some inspiration in your life, go and check out the show and purchase one of these original masterpieces from this upcoming artist, for it will inspire you and your family and everyone who visits your home. 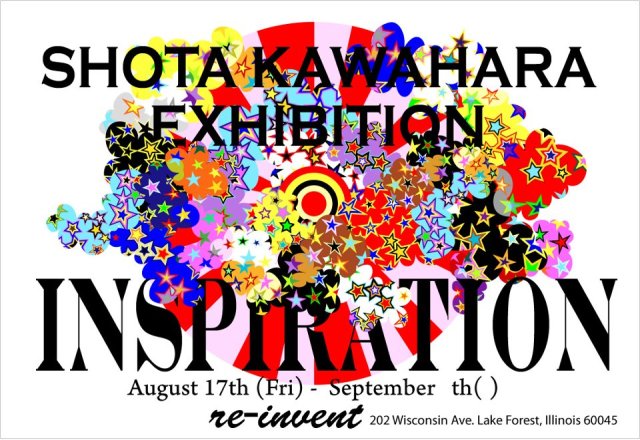 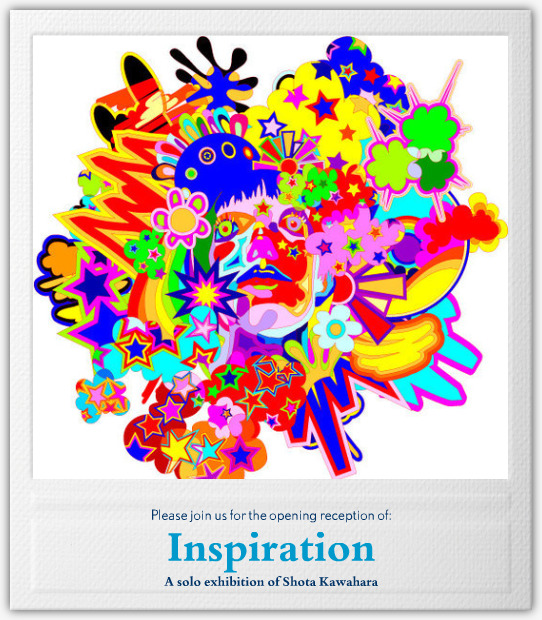 YOU KNOW YOU ARE FREE

Walk into the forest, Sit down and rest.

Take off your shoes, Close your eyes.

Look at the trees, You know you are free.

You are the only one, not lonely one.

Let it be, You know you are free.

Play with kiddies, Talk with oldies.

Eat from the Earth, Have a fire bath.

Is there any hurry? You know you are free.

Dance to the music, Believe in magic.

Let your imagination go, over the rainbow.

Jump into the sea, You know you are free.

Bring your experience, with great patinece.

Keep the faith, Seek the truth.

Open with your key, You know you are free. 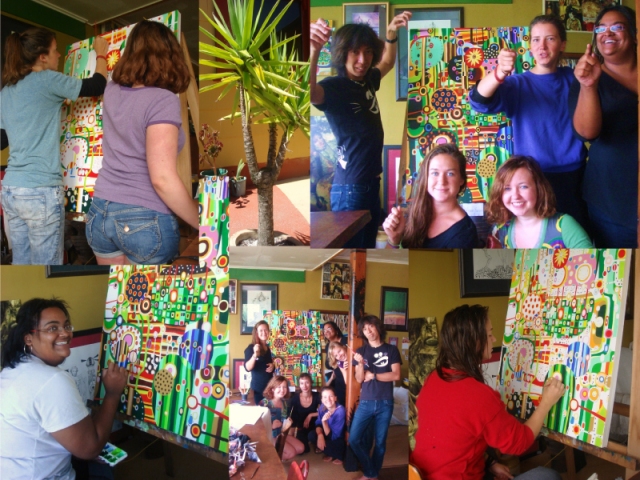 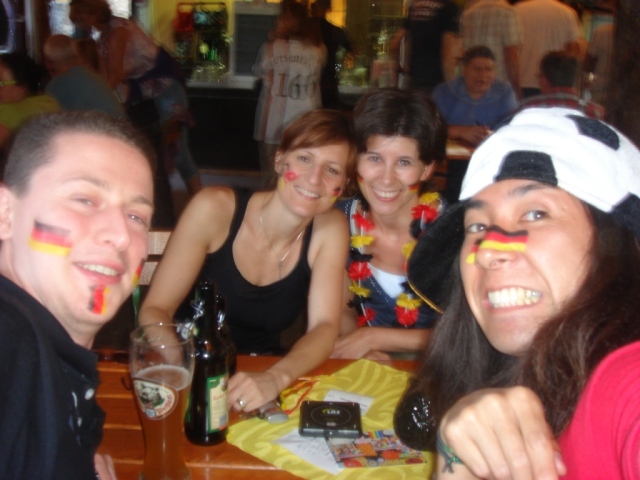 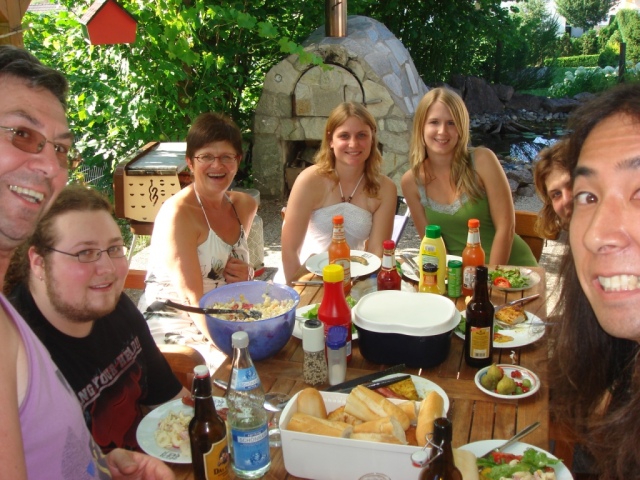 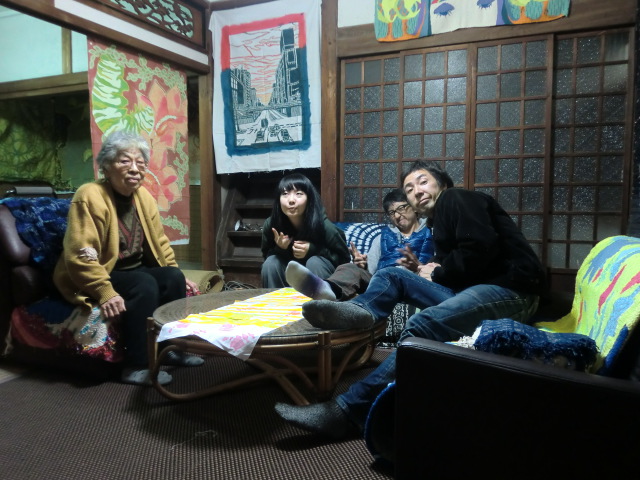 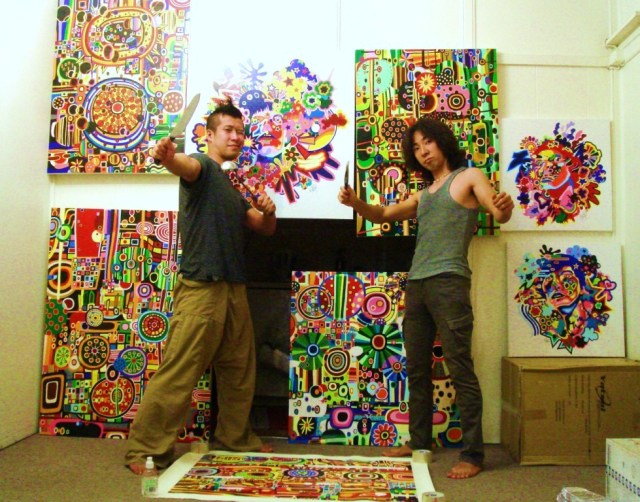 Shota with his Chef Brother at his restaurant in Bondi, Sydney (Kawahara’s art adorns the walls of the restaurant)
Garyu Art and Dining: http://www.garyu.com.au/ 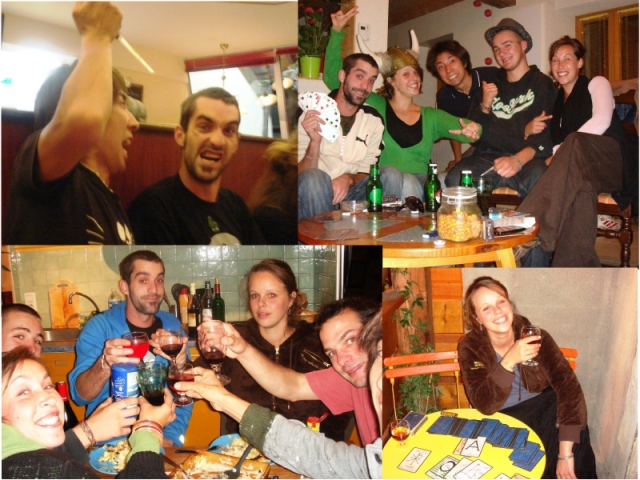 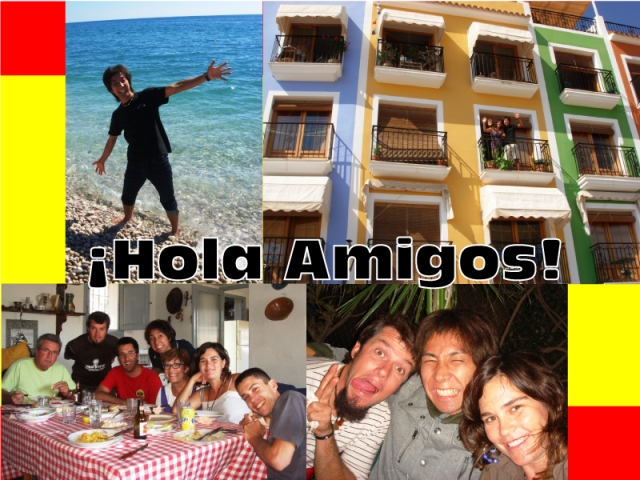 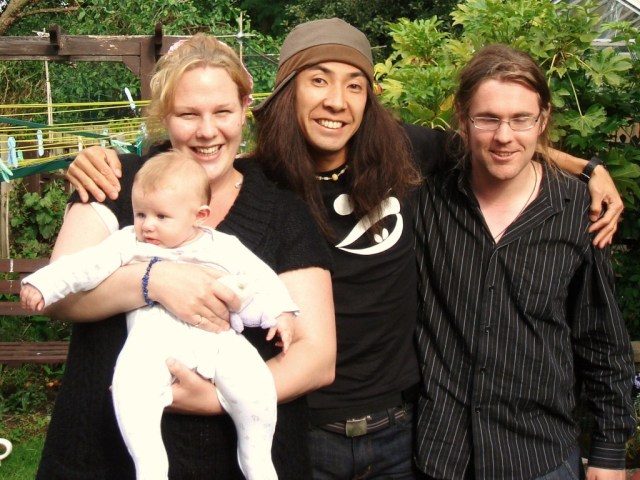 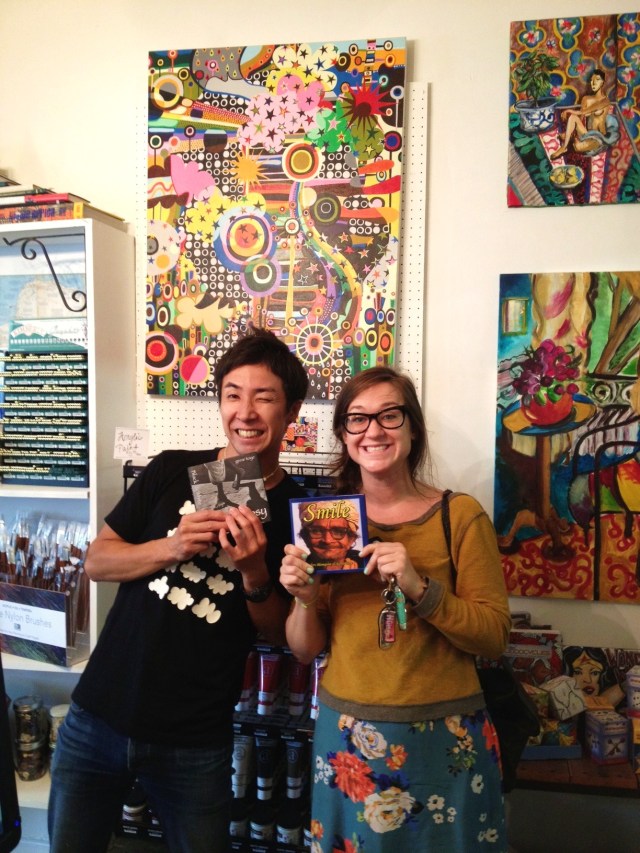 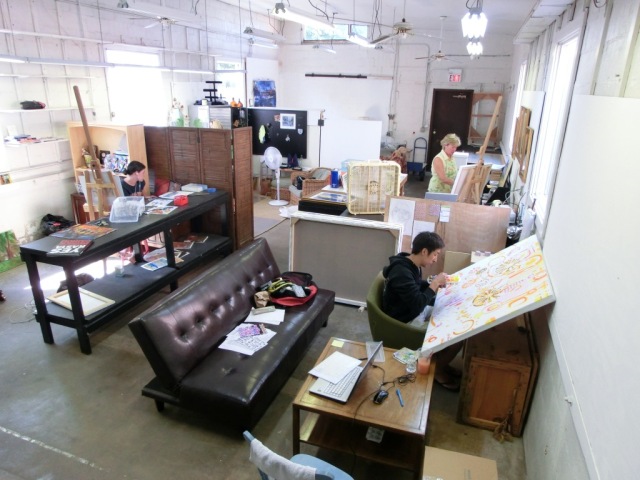 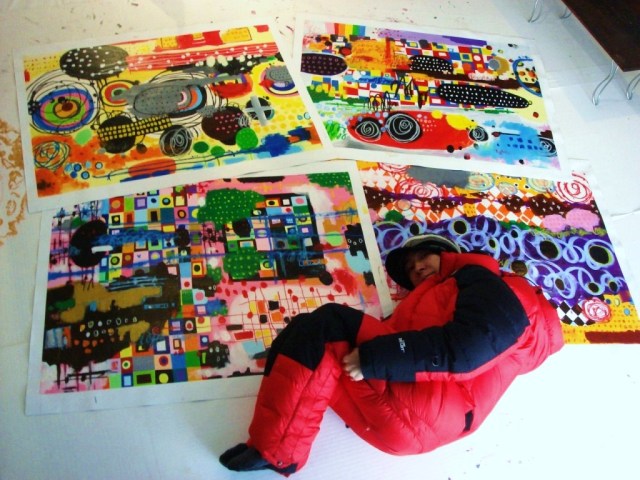 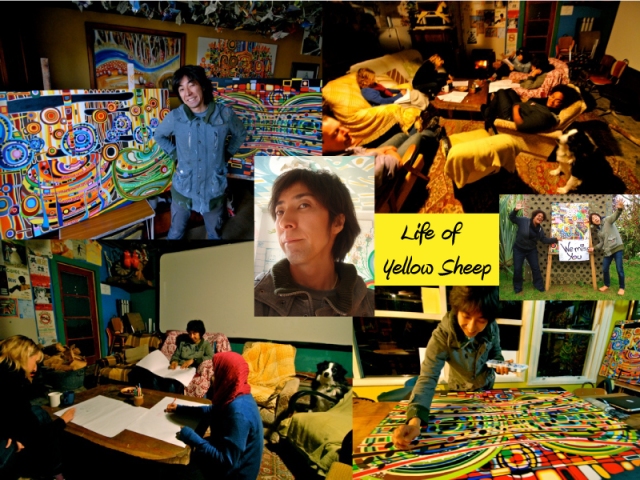 Paul Murray is the founder of the LivinginPeace Project. www.livinginpeace.com Paul originally from Australia, but have been living in New Zealand for 14 years. Before that he was in Japan for a decade working as a journalist. He met his wife Sanae in Japan and they married in 2008.
View all posts by LivinginPeaceProject →
This entry was posted in Art, Business, Education, Japan, Karamea, LivinginPeace Project, New Zealand, Travel, Uncategorized, United States, West Coast and tagged Art, artist/, Chicago, Exhibition, Gallery, Japan, karamea, Lake Forest, LivinginPeace Project, New Zealand, Painting, Re-Invent, Resident Artist, Shota Kawahara, South Island, Travel, United States, West Coast. Bookmark the permalink.