Posted on February 26, 2013 by LivinginPeaceProject

Frances Tordoff came to stay at Rongo Backpackers & Gallery in the summer of 2012 on the recommendation of her daughter Bekki, who had previously worked at Rongo as a Wwoofer (Willing Worker on Organic Farm) several times since the hostel opened in 2004. 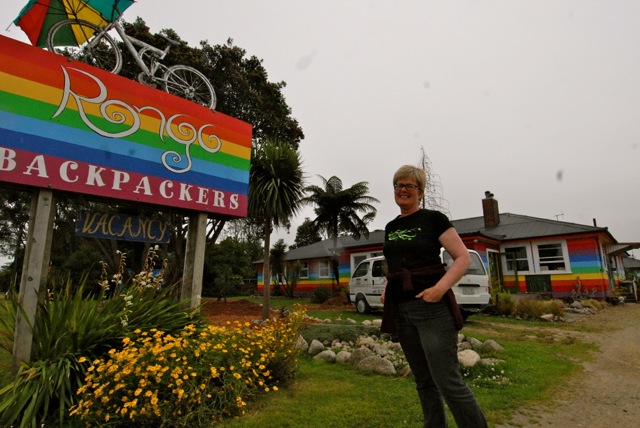 Rongo is part of the LivinginPeace Project, a venture founded in 2001 that combines art, travel, permaculture and education into a sustainable business. Environmental responsibility and energy efficiency are paramount in all LivinginPeace Project business decisions and the project has grown to include a backpackers hostel, motel complex, permaculture farm, 31-hectares of forest, a transport service, radio station and a share in the local organic food and clothing recycling shop.

Frances is originally from Manchester, England, but came to New Zealand in January 2012 to work in Dunedin as a rehabilitation instructor for visually impaired people.

“My daughter Bekki came home to the U.K. inspired after having stayed at Rongo, she was much more careful about recycling and introduce the bokashi (composting system) to our home, she was much more aware of the environment and the impact we have on it.” “As soon as she got home, she went into her room and said, “Why do I have all this stuff?” and immediately went about reducing her possessions, took a load of stuff away and gave it to the local charity shop.”

The changes in her daughter’s behaviour, and her persistent badgering to visit the LivinginPeace Project made Frances curious to visit Rongo and see for herself just what all the fuss is about.

At 56, Frances is no longer a young budget traveller off to see the world, but found staying at Rongo to be a pleasant and thoroughly enjoyable experience. “It was great, there were all sorts of nationalities of people staying when I was there and they were all getting on together.” I was not excluded from any activities because of my age and my stay at Rongo was very peaceful and relaxing…it’s a nice bit of space away from the madness.”

Frances generously decided to invest $1,000 to the LivinginPeace Project and in return received a holiday voucher, which she can pass on to her younger daughter Alice, who is the only Tordoff family member not to have visited the project, or she may decide not to redeem the voucher, which would effectively make the $1,000 a donation to the venture.

“This place did so much for my daughter (Bekki), so this is a bit of pay-back…If I had more money I’d give it to you,” she said.

The money received from the LivinginPeace Project Holiday Voucher initiative will be used to further develop and improve the facilities and services so that they will be available to the people who choose to redeem their vouchers in the future. It is a means of raising money to invest in the project without the burden of debt-servicing and in the process, the sale of the vouchers serves to promote and market the venture.