Posted on March 21, 2013 by LivinginPeaceProject

A thirst for inspiration, wisdom, experience and understanding led Gerar Toye (52) on an international quest from his birthplace in South Auckland to Karamea at the top of the West Coast of the South Island of New Zealand.

The youngest of six children, Gerar spent his formative years in Manurewa––one of the most multi-cultural suburbs of Auckland and also one of the roughest and toughest––before moving to Borneo for a couple of years with his father Dallas, a school teacher, and mother Pauline, a volunteer nurse.

On returning to New Zealand and completing his primary education, Gerar developed a strong interest in photography and became a darkroom printer for New Zealand’s top professional photographers. The job satisfied his passion for photographic printing, but the formulaic style of the photography he was charged with printing and the sterile, safe and conservative images he constantly saw emerging in the developing fluid left him wanting to make his own images and express his creative ideas through photography.

Gerar quit the job that no longer inspired him and went to Australia in 1982 for a couple of years before returning to Borneo to hook up with childhood school friends there. The trip triggered his wonderlust and he spent the next two decades travelling the world and gaining the international experience, self-education and wisdom that travel affords.

Sri Lanka was next and there he met fellow travellers from the north, who had strange tales of India to share. “In Aragum Bay, I met people who had travelled through India who told me crazy stories about the country with sparkles in the eyes, which inspired me to visit the country,” he said. “I couldn’t believe the tales I heard and wanted to verify them for myself…I wanted to prove them wrong, but after seeing the country for myself, I found out that all I’d heard was true and more!”

His tourist visa allowed for six months in India, but that was in no way sufficient once his interest in the country and its diverse culture was piqued. He returned 10 times and travelled extensively all the while with his camera at the ready.

In 1989, he heard about the Kumbh Mela Festival, a Hindu pilgrimage that takes place every four years in four different locations in rotation. Hindu devotees flock to bathe in the sacred Ganges River and here he photographed the religious, cultural and anthropological spectacle of the largest gathering of humans on the Earth.

The experience was overwhelming, 30 million people assembled in one location, with 70 million attending the event over the course of one month inspired Gerar to return to participate in the Maha (large) Kumbh Mela festival in 2001, which occurs every 144 years and is held at Triveni Sangam the “meeting place” at the confluence of the Ganga, Yamuna and the Sarasvat rivers.

There Gerar photographed the myriad people assembled in the largest-ever congregation of religious pilgrims with his unique “shooting from the hip” style that enables him to capture candid moments, spontaneity and genuine emotion in his subjects. The hand-printed images are now being exhibited at the Global Gypsy Gallery in Karamea.

With the travelbug’s teeth now deep into his flesh and Gerar ventured to numerous countries, travelled through the Americas, Europe and Asia, all the while with camera at the ready to capture moments of human emotion, joy, expression and life moments. With three cameras and 200 rolls of film each year Gerar had no room for cold or wet weather clothes so spent his time in constant warmth with only one winter in his twenty years on the road.

Opportunities abounded and he helped everyone he met basically woofing before it was invented. These led to some marvellous experiences, including being invited to tour America with Paul Kelly and Crowded House, which he turned down to follow an affair of the heart. Using his darkroom skills he built a darkroom on a 1910 Danish Gaff rigged ketch from Fremantle West Australia through Indonesia, Micronesia and Japan and on to Alaska.

He now had a body of work that he could share with others and market to finance his vagabond lifestyle. Years on the road had also furnished him with wisdom and spiritual understanding well beyond his years and he decided to mix both his spirituality and photography to create postcards, posters and T-shirts of his images matched with inspirational quotations and put his experiences out into the retail market. Despite significant effort and attempts to offer his cards to retail outlets, shop owners were not keen to stock his products, so he decided to go it alone and sell them himself.

He returned to New Zealand in 1990 initially to Mangawhai Heads north of Auckland where his now retired parents live. While there, he painted an ecological mural on the public toilets as a move to think globally and act locally. The mural was graffiti-free until it started to peel ten years later and he was commissioned to return to repaint it for the locals.

He later travelled in a purple 1956 Bedford bus called “Carpe Diem” with the Kiwi Gypsy Fair for five years, circling the country six times and selling his wares at markets, festivals and fairs. The response to his products was very positive and the feedback he received encouraged him to produce a book compiling his photographic images and quotations. However, finding a publisher to handle the idea proved frustrating as the idea was considered unsaleable. “The images and quotes were very popular with the public, so I knew a book would work,” he said. Publishers thought otherwise and he was forced to go it alone and using all his credit cards to produce his first book “Reality is for Those with no Imagination,” which was published in 1997.

The next challenge was to find book retailers that would stock and sell his book. This again proved frustrating as he wasn’t backed by a publisher and as a sole trader, retailers were less than helpful and he met with similar resistance from bookshop owners he had experienced when marketing his quote cards.

Around that time the Internet was gathering popularity and he set up a Web site www.globalgypsy.com to stock his own work and market it online. This proved a good move and his product started to move. Retailers gradually came on board and his work is now stocked in over a hundred outlets across New Zealand and Australia. His book sold out and has been translated into French, German and 16 other languages. He now has eight books on the market and has sold over 14,000 copies making him one of New Zealand’s best-selling authors.

In 2002, Gerar and his then partner Amla had boy/girl twins Kiva and Rimu. His nomadic lifestyle quickly changed and he became a father, settled back into life in New Zealand,

He decided to pursue his creative passion and enrolled in a fine arts degree at Canterbury University in Christchurch. He initially decided to study painting, but on reflection switched to filmmaking as he felt the artform had a greater propensity to influence people in a positive way. “I didn’t feel I could change the world by painting,” he said.

The challenges and responsibilities of fatherhood forced him to leave university before graduating, but he managed to express his talent for directing and writing film and produced a low budget ($400) 20-minute short film titled “Zen and the Art of Hitchhiking,” which can be seen online:

Zen and the Art of Hitchhiking

Invited by Paul Murray to revisit Karamea and the LivinginPeace Project he had started Gerar was inspired to be part of the dream to bring people together and he settled into life in the small remote rural community in 2007 after purchasing the old information centre building in the centre of town. He painted it in rainbow stripes and established a retail outlet of his own to market his growing range of books, postcards, T-shirts, fridge magnets, jigsaws, bumper stickers, framed photographs and posters and expanded with a range of goods and products including; organic food, local produce, artworks, fair trade items, second-hand goods, accessories, curios and pre-loved natural-fibre clothing…the Global Gypsy Gallery was born.

Today, the Global Gypsy Gallery is a veritable emporium and must-see shop for any visitor to Karamea. It has become a Farmer’s Market where local organic fruit and vegetable growers can sell their excess produce, local artisans can sell their creations, the best cup of tea and coffee in town and hours of browsing through a treasure trove of quality new and used products from around the world. Gerar’s photographs adorn the walls and he again has overcome the challenges of unsupportive retailers and conservative mindset by doing it himself…and doing it very well.

Gerar Toye at he Helm of the Globl Gypsy Gallery 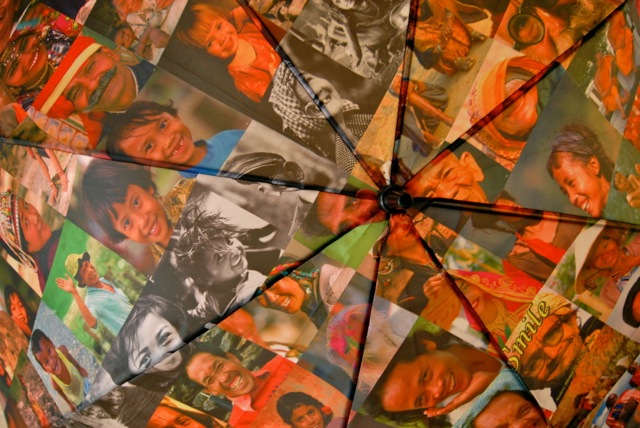 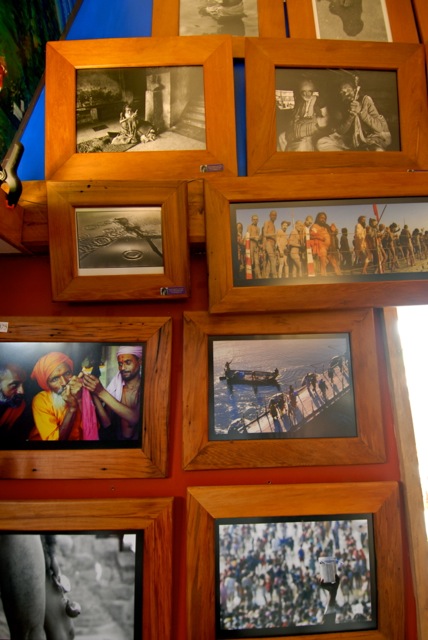 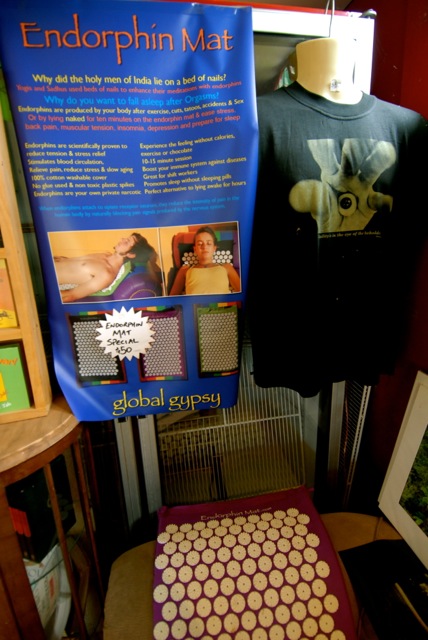 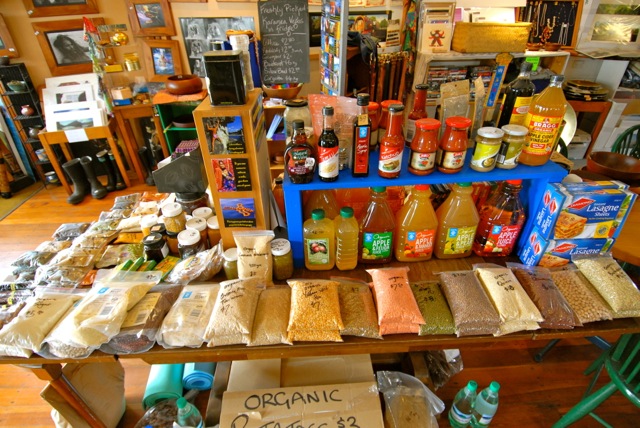 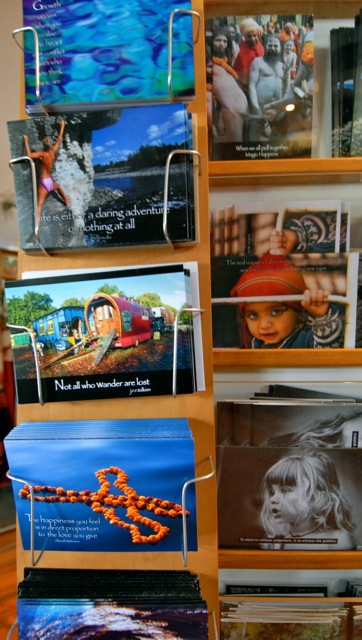 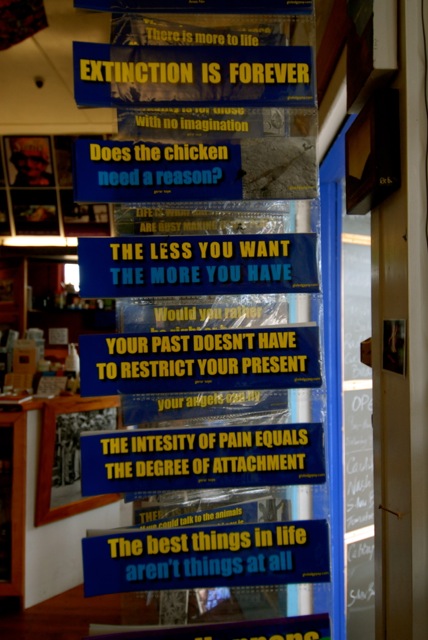 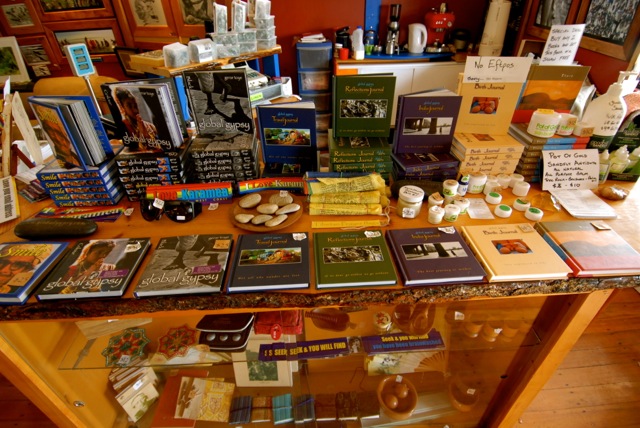 Gerar commutes between Karamea in the summers and Bellingen N.S.W. Australia where his twins who are now ten attend the Chrysalis Steiner School. He is working on two film scripts “Holy Cow Shit” and “My Sweet Revenge,” which is about 7 strangers who kidnap former U.S. President George W. Bush and hold him captive for a week. Gerar is currently seeking funding for the film.
His dream now is to make films that will inspire others to reflect and think for themselves and to connect with the love of giving and compassion.
Another long-term goal is to establish the Global Gypsy Cafe Project where cafes would be set up in countries of need and staffed by Wwoofer volunteers to train orphans and children of sex workers to grow food and run the cafes. Gerar considers that the way to freedom for many in their cycle is to receive skills and not handouts.
Each cafe would be self-sustaining and provide healthy organic food to travellers, while encouraging people to see a notice board of locals that need assistance. It is hoped that graduates from the LivinginPeace Project Permaculture Design Course would be able apply and share their knowledge of food production though the project.
Disillusioned by charity tourism, Gerar sees a way that the efforts of travellers can be harnessed and directly helping those in need. After his time in Calcutta with Mother Teresa and working in Dr Jacques clinic, he saw a direct way he could help by creating a system where travellers can be placed where they can help the most without anyone flying anywhere and without money changing hands.
His upcoming Holy Cow Shit film will express the concept in film and all that is required is $15,000 funding if you have more than you need and would like to share.
Gerar is seeking funding to establish a not for profit entity for the project, which could potentially place thousands of travellers in areas where they can give and receive the most and help needy people take charge of their lives.
If you can assist Gerar realise his vision in any way, please e-mail Gerar Toye: nz@globalgypsy.com
Additional information is available on the Global Gypsy Web site www.globalgypsy.com