Posted on June 6, 2013 by LivinginPeaceProject

The following letter was sent out to residents of the Northern Buller district regarding proposed resource consent application by the “Department of Conservation” to permit the government body to aerially poison 113, 699 hectares of the Kahurangi National Park. The letter invited comment…below is mine. 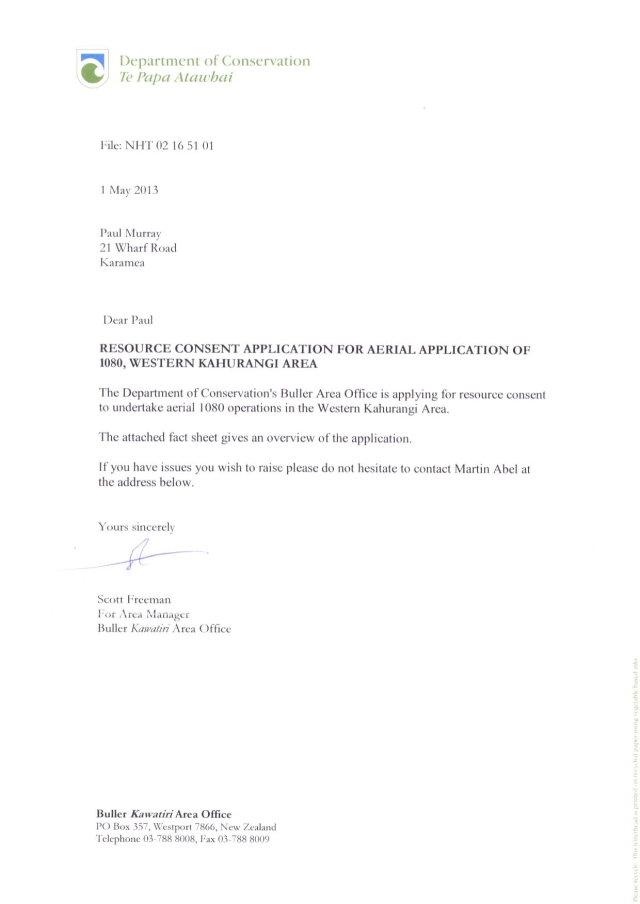 I received a letter from Buller Kawatiri Area Manager Scott Freeman on May 17, 2013 (letter dated May 1) regarding the application by the Department of Conservation (DOC) for a resource consent to conduct an aerial 1080 poison operation covering 113,699 hectares in the Western Kahurangi area.

The letter invited me to raise issue with the resource consent application by contacting you. I have numerous concerns about the proposed aerial 1080 poison and have a number of questions for you regarding the drop.

I am a Karamea tourism business operator. I also have a permaculture farm in the region that has been pesticide free for eight years.

I feel that the proposed 1080 operation by the DOC will compromise both the marketing strategy for my tourism businesses and also the pesticide-free status of my permaculture farm.

I also own and maintain a Web site promoting the Heaphy Track (www.heaphytrack.com) and administer a FaceBook page for the Heaphy Track (https://www.facebook.com/HeaphyTrack). I am also a member of the Karamea Estuary Enhancement Project (https://www.facebook.com/pages/Karamea-Estuary-Enhancement-Project-KEEP/229300180441656) I actively support DOC activities in the Kahurangi National Park as evidenced by my involvement in promoting DOC facilities and projects in the region. I also support pest-specific possum control initiatives conducted by DOC and the Animal Health Board in the Kahurangi, but strongly oppose the broad-scale, indiscriminate broadcasting of 1080 pesticide over a vast region of the park as I consider it:

Myself and many other Karamea residents publically opposed the aerial 1080 operation conducted in the Kahurangi National Park by the Animal Heath Board in 2008 and my position and that of the other residents on the issue has not changed. We find aerial 1080 pesticide operations to be an unacceptable solution to possum control and evidence suggests it creates a raft of other problems in the forest.

Scientific studies show that rat populations explode after aerial 1080 operations and that was certainly the observation of people living in Karamea following the 2008 poison programme and rat numbers in and around the town are still high in my experience. Prior to the 2008 1080 poisoning, I hadn’t seen a rat in the town, however, soon after the aerial pesticide operation, rats began to invade our homes and businesses. It’s ironic that the rats you say are one of the targets of the proposed 1080 programme are resultant from the last poison operation.

Poisoning vast areas of the national park leads to an elevation in rat numbers in the poison zone. Rats quickly repopulate the poisoned forest and come into an area devoid of predators and with an abundant food supply and their numbers are shown to surpass population levels that existed in the area prior to the pest-control operation. This is supported by scientific evidence in a study published in the Landcare Research Kararehe Kino vertebrate pest research report (December 2008).

Following the experience of the 2008 Animal Health Board (AHB) drop and the associated negative impact on and restriction to my business trade, I request DOC give me advanced notice of any scheduled similar aerial 1080 poison operations in the Kahurangi National Park so I can inform all potential customers that my business will be closed for the duration of the programme and for at least one month following to ensure all risk associated with the baits has passed and the pesticide has broken down in the soil to “harmless by-products,” or until all green baits have decomposed. I consider this the only responsible action I can take to protect the reputation of my business, honour my marketing strategy––in which I actively invite people from all over the world to visit the pristine, pure, clean, green and scenically beautiful environment in the Karamea region––and prevent the risk of possible exposure to the poison of guests staying at my accommodation facilities and utilising my transport service.

I have established good standing as a professional eco-tourism operator over the past 10 years and I consider that the proposed aerial 1080 operation is a serious threat to that hard-earned reputation. If my business continues to host guests during and immediately after the 1080 poison programme, I risk my business marketing strategy being considered specious and hypocritical given that they way I promote my business is contrary to inviting people to come and visit a poisoned forest.

There will be a significant financial loss incurred by my business by closing for which I reasonably expect to be compensated. Would you please provide me with information as to how I might file a business compensation claim with the Department of Conservation so that I might recover the losses incurred resulting from the interruption to my business and restriction to trade?

I also intend to offer my incapacitated accommodation facilities to domestic and international journalists and documentary filmmakers for free during the period of the drop and beyond so that they might have and opportunity to cover the programme thoroughly and report on the impact the DOC-sponsored poison operation has on the people of Karamea and the ecology of the Kahurangi National Park.

I also have several questions ahead of the application for resource consent to conduct this unprecedentedly large pesticide programme in the Western Kahurangi area.

I am not opposed to pest-control and appreciate that national park management is a considerable challenge for DOC, but ask that any pesticide use specifically target the pest in question. I strongly oppose broad-scale indiscriminate aerial poisoning of vast regions of DOC administered land in the name of New Zealand and New Zealanders. I appreciate your consideration of the issues I have raised and hope to receive a full response to the questions I have asked in this letter. Should you have any questions, or require more information, please e-mail, or call me any time.

CC: Editors of The Westport News, The Greymouth Star and The Christchurch Press

Response from Department of Conservation 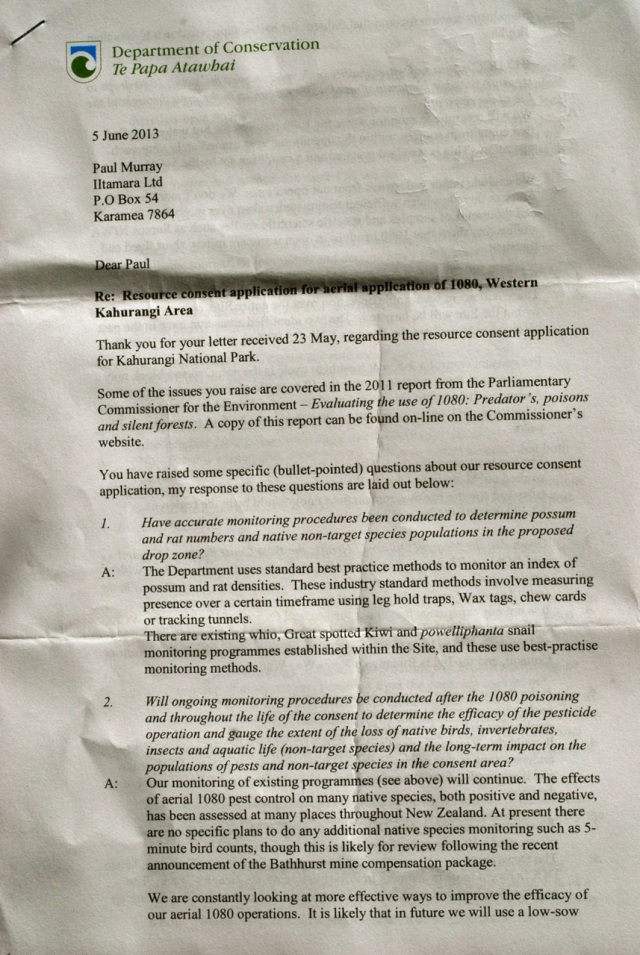 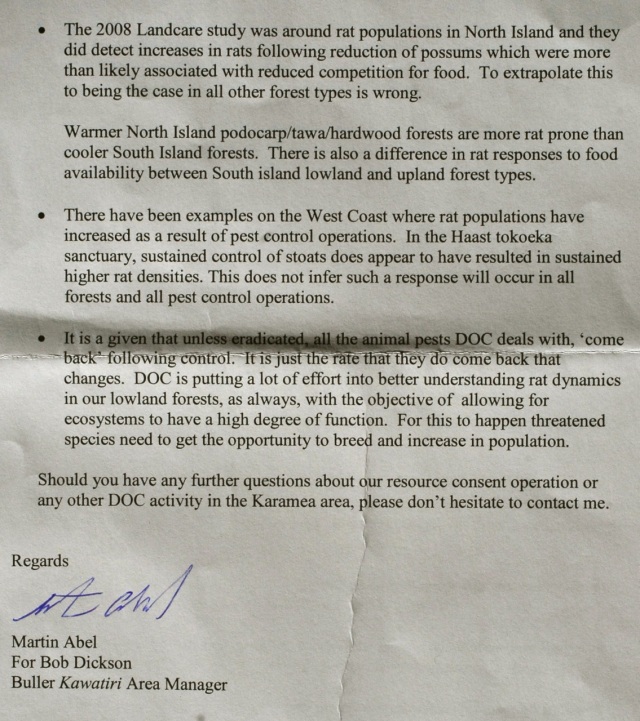