Posted on June 28, 2014 by LivinginPeaceProject 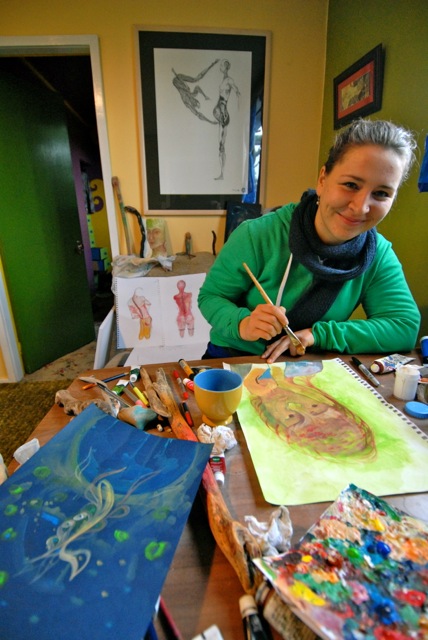 German artist Almut Prange was travelling around New Zealand on holiday and found the experience spoke to her muse. It said, “You must go somewhere quiet and concentrate on painting.”

She listened to her inner voice it led her to Karamea at the top of the West Coast of the South Island, where she settled for a month as a resident artist at the LivingInPeace Project, a venture that supports aspiring artists and helps to promote their art.

Like many creative people, Almut was experiencing a frustrating artistic block, but she quickly overcame the barrier when she arrived in Karamea and took up residency in the “Artist’s Bach,” a quiet, peaceful self-contained cabin on a permaculture farm, which is part of the Karamea Farm Baches complex. With chickens on out one window and grazing sheep on the other, she set to work on rediscovering her inspiration.

A prolific deluge of artistic production ensued and Almut not only overcame the mental obstruction to her creativity, but also found new direction in her work from the quiet contemplation afforded her by the residency and being surrounded by the beauty of the Kahurangi National Park that envelops the small rural community of Karamea.

The New Zealand landscape, Maori cultural influences and the patterns and forms of nature became evident in her new works. She collected driftwood from the beach and began to add paint to enhance the natural shapes and designs on the wood. Abstract portraits were enhanced with Maori-like patterns and influences and her art took on a new dimension.

Social interaction in the evenings with the staff and guests at Rongo Backpackers & Gallery, which is also part of the LivingInPeace Project, provided her further inspiration. “I really enjoyed hanging out at Rongo surrounded by artworks from previous resident artists, watching movies in the cinema, enjoying the music on Karamea Radio, eating dinner together…great food and good conversation,” she said. 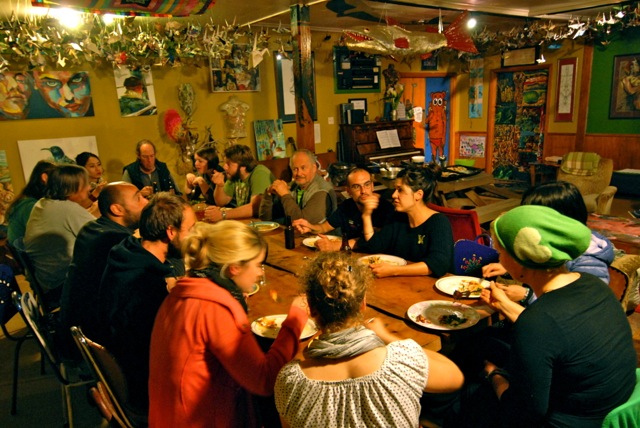 Dinner in the Rongo Gallery, great food and good conversation with people from all over the world every night.

Almut showed her gratitude for the artist residency by leaving behind several of the artworks she finished during her stay, some abstract portraits and painted driftwood that was instrumental in her rediscovering her artistic inspiration. Rongo guests will be able to see her work and that of many other resident artists on display in the gallery at Rongo Backpackers.

Thank you Almut for coming all the way to Karamea and accepting an artist residency and for the beautiful artworks you left us with, we wish you all the best for your future in art and life.

Before heading off to continue her travels through New Zealand, Almut agreed to an interview on Karamea Radio, which broadcasts from Rongo, you can listen to the interview by clicking on the link below. 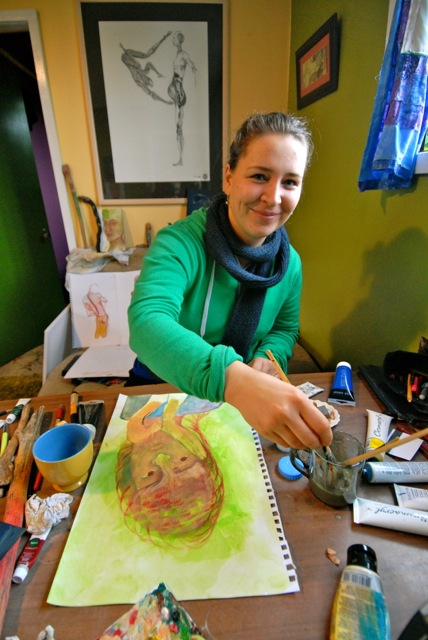 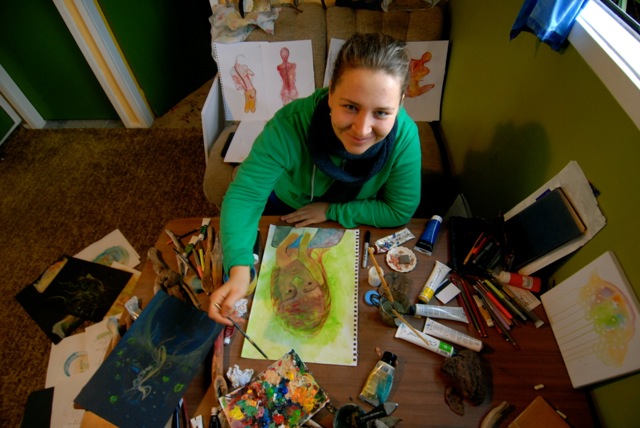 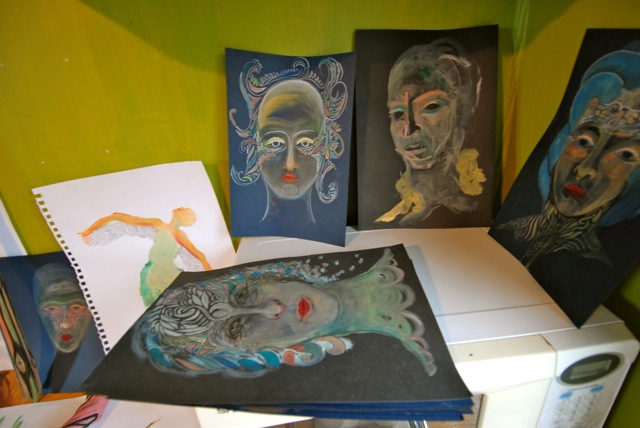 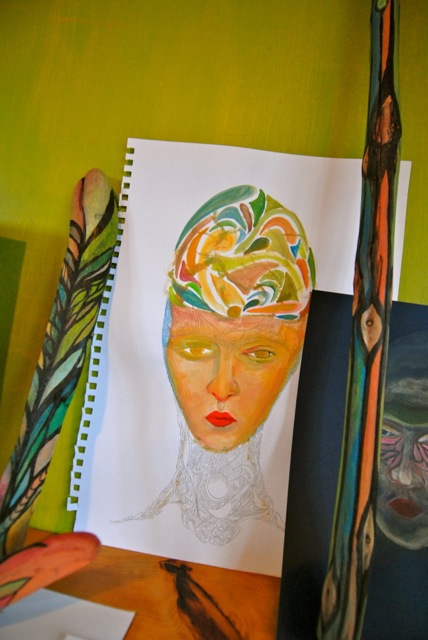 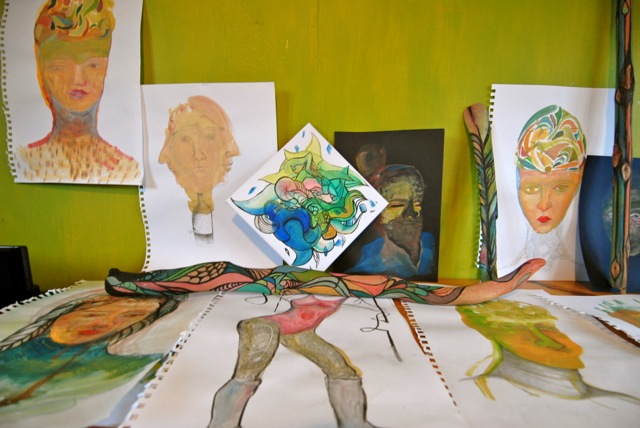 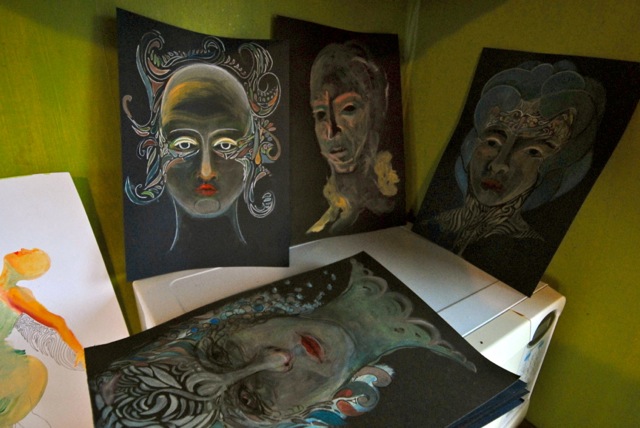 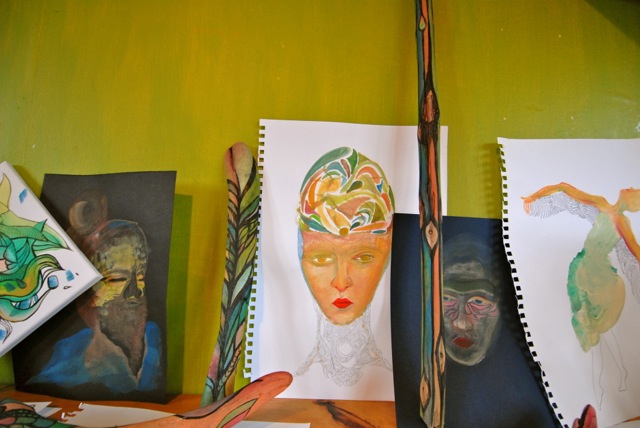 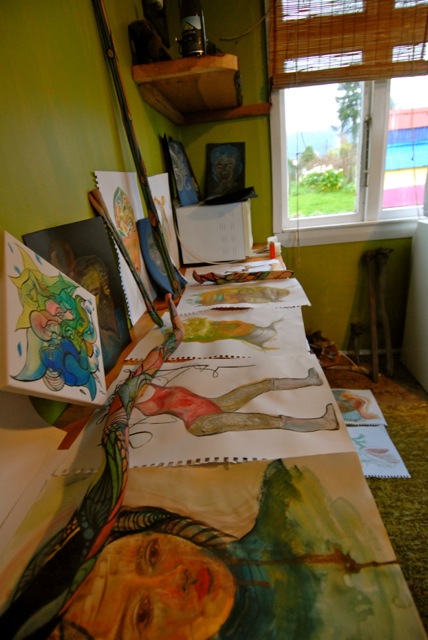 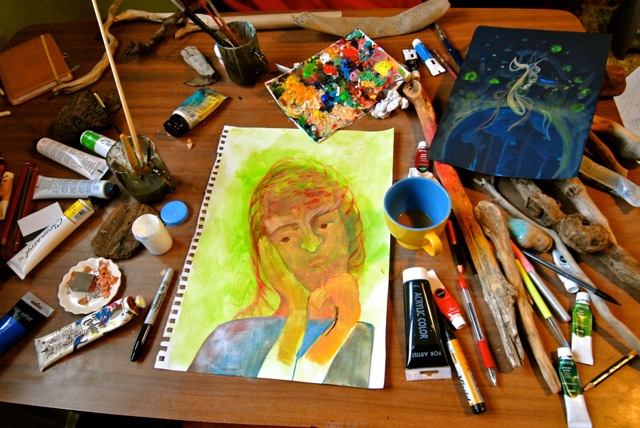