Posted on July 10, 2016 by LivinginPeaceProject

The mystery of the New Zealand Government’s persistence with aerial baiting of vast regions of the “Clean-Green/100%Pure” country with 1080 poison was revealed yesterday by Department of Conservation (DOC) officials after a sighting on the Heaphy Track of the elusive cryptid known as “Man-Bear Possum.” 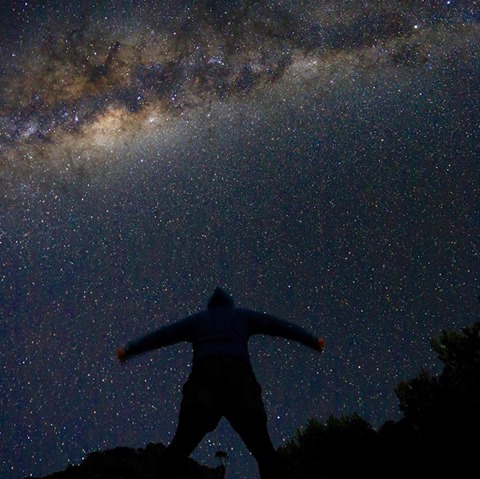 DOC Ranger Mr Dick Rossita was able to capture the only-known image of Man-Bear Possum at the Heaphy Hut on a clear winter night as the Yeti-like creature roared at the moon with its distinctive plaintive cry. Mr Rossita said, “The macabre sound emanating from the man-beast pimpled me with goosebumps from head to foot…I have never heard anything as terrifying in my life.”

It is thought Man-Bear Possum is a mutant bush-tailed possum (Trichosurus vulpecula), which were introduced to New Zealand from Australia by European settlers in the hope of establishing a fur industry. However, as possums have no natural predators in New Zealand, their numbers escalated to the point they are now considered a pest and the New Zealand government, through its agencies DOC and the Animal Health Board, have a policy to control possums by aerially poisoning the animals with cereal baits infused the toxin sodium mono-flouroacetate, commonly known as 1080.

Public opposition to the practice is widespread, but protests have thus far fallen on deaf ears as the N.Z. government has ignored opposition and increased the use of the poison on the back of a 2010 report by the Parliamentary Commissioner for the Environment Jan Wright report that recommended an escalation in the broad scale indiscriminate aerial broadcasting of the poison. Anti-1080 activists liken the policy to “Bombing a city to kill the criminals,” which is an effective, but pyrrhic crime-prevention solution.

Opponents of the indiscriminate use of the dangerous toxin 1080, which is banned in most countries, are at a loss to understand why the N.Z. government has failed to heed their concerns and warnings that the poisoning of the country is upsetting natural ecology, killing native birds, insects and aquatic life, poses a threat to the well-being and quality of life of the people living in areas near poison zones and is not an effective or acceptable means of controlling possum pests. The indiscriminate use of toxins is rightfully outlawed across New Zealand and most other countries, and anti-1080 campaigners demand that poison use should specifically target the pest species the programme seeks to control,  yet the government persists with aerial baiting against the will of the people and now we know why.

Sources close to DOC reveal that the Australian possum has flourished here in New Zealand since its introduction int he late 1800’s. “Possums bred rapidly in their new environment of an abundance of premium quality organic food and no predators. Possums in the Kahurangi National Park, which has the most diverse range of flora of any of New Zealand’s national parks, have been born into a diet that includes a veritable smorgasbord of botanical delights and medicinal herbs and plants that has also afforded them incredible health and vitality. As a consequence of their good fortune, they have steadily increased in size, strength and intelligence over the generations and we are now faced with what could be best described as “SuperPossums,” a DOC spokeswoman said on condition of anonymity.

The situation is, apparently, even more concerning as it is thought a worker for the New Zealand Forestry Service, which became DOC in 1987, became lost in the middle of the Kahurangi National Park in the late 1970s and was never found. Departmental officials now consider the man, who was remembered only as Bushy Thompson, survived and regressed to his basic feral instincts and basically became a wild animal. Although no trace of Bushy has ever been found, it is thought that he cohabited with the animals and had particularly close, even carnal, relationships with possums, which kept him warm in winter and sated his other feral instincts, especially in the Spring.

Man-Bear Possum: Half Man, Half Bear, Half Possum

With the introduction of human genes into the possums makeup, the resultant hybrid vigour of the aberrant union’s resultant progeny proved considerably more than the sum of their respective parts. Generations of inbreeding and further cross breeding between marsupial and mammal have incredibly resulted in new species..Man-Bear Possum. The simple possum further mutated and can now walk upright, has man-like intelligence and more resemble a human grizzly bear than a possum.

It is said Man-Bear Possum exhibits a werewolf-like transition when the moon is full.

Dick Robertson, Head Honcho at Kawatiri/Buller DOC, which is responsible for the administration of the Kahurangi National Park, confirmed the report at a recent press conference in Westport when he said, “I assure you (the general public) that everything is well in hand and we have the situation completely under control, there is no need for panic.” “We have a plan to eradicate Man-Bear Possum forever,” he added. “We must ensure that Man-Bear Possums are eliminated with extreme force and absolute certainty to prevent any chance of them straying into small towns on the fringe of the Kahurangi like Karamea where human populations are close to the national park.”

It would seem that the aerial broadcasting of 1080 poison in New Zealand and the decimation of possum families over the past 45 years has led Man-Bear Possums to have considerable resentment and animosity toward DOC over the persistent poisoning programmes and the beasts have actively been seeking out and attacking DOC staff working in the Kahurangi National Park with macabre results. The savaged remains of several track workers and a hut warden have been  found by mountain bikers and trampers on the Heaphy Track this winter. It seems Man-Bear Possums are attacking at night and specifically targeting sleeping DOC workers in their beds. Robertson also confirmed this horrific rumour and said, “Man-Bear Possums have become carnivorous and they hunt, slaughter and eat humans. The very species that gave rise to its existence, has now become its prey.”

However, not everyone agrees with DOC’s “shock and awe” approach to the problem and consider such action will only serve to antagonise the beast. Karamea Councillor, Ms Cheryl Peel, said, “The Department of Conservation is risking the lives and well-being of my constituents. Their approach to the Man-Bear Possum problem is like Henry Kissinger in Cambodia…bomb everything to pieces…well we know that only pissed the Viet Cong off.”

Residents ot Karamea and Little Wanganui joined hands to seek and end to aerial 1080 operations by DOC and other N.Z. government agencies, which they fear will further antagonise Man-Bear Possums and put their families at imminent risk of attack by the beastly, super-human savages.

The compassionate residents of the small communities of Karamea and Little Wanganui, which are effectively in the Kahurangi National Park consider an approach of non-violent reconciliation with the descendants of Bushy Thompson would be more appropriate…embrace the beasts, have empathy with them and and show them kindness and humanity. They believe that violence begets violence and the aggressive toxic attack by DOC will only lead to an escalation of the potential threat to their peaceful happy lives. 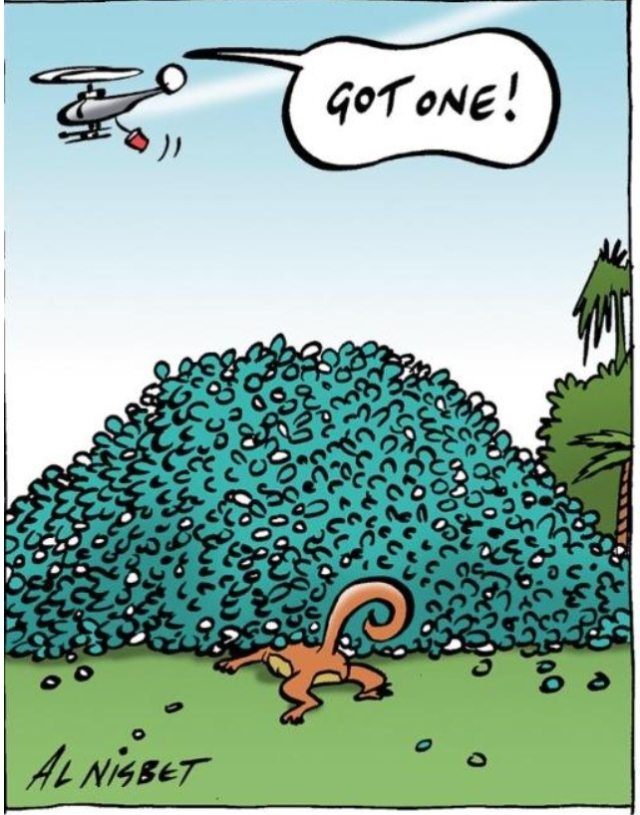 Residents of Karamea and Little Wanganui consider poisoning the entire Kahurangi National Park to eliminate Man-Bear Possums to be overkill.

Conspiracy theorists put Uncle Sam behind the evolution of Man-Bear Possum and claim the United States is seeking to spread a wave of fear across New Zealand that will result in Kiwis begging for U.S. military intervention to eliminate the threat to human life. Cartoonists and illustrators have been quick to characterise Man-Bear Possum and the beast has been used in children’s stories, political satire and propaganda. 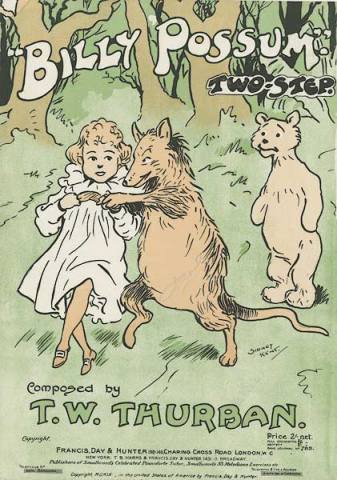 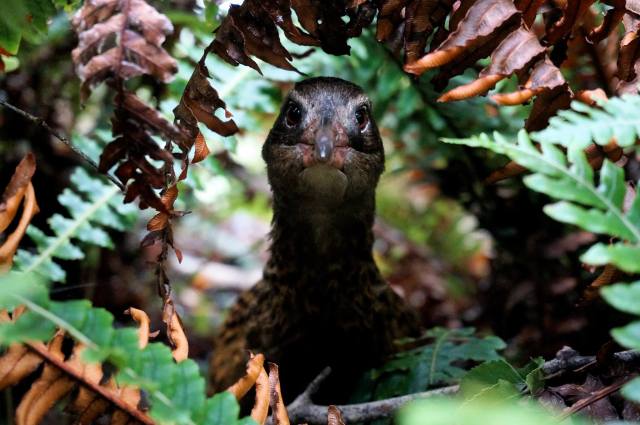 This young weka is a likely “collateral damage” victim of the aerial 1080 programme, which seeks to obliterate the Kahurangi National Park in order to save it.

Opponents to aerial 1080 poisoning include Mother Nature and the Ban 1080 Party, which was formed ahead of the last national elections. Head of the Ban 1080 Party, Wally Williams, said, “I’m concerned that poisoning the entire Kahurangi National Park will set into play an irreversible ecological decline, decimate bird, insect and animal populations and lead to an eventual collapse of the entire national park ecosystem. He went on to add, “I am further concerned about a likely explosion in rodent population following the 1080 operation as rats and mice will be the first species to recover and they will come into an environment of abundant for and an absence of their traditional predators like hawks, falcons and owls, which will all be killed in the poison blitz.”

New Zealand’s new Minister for Conservation Ms Barry Magpie, who appears to be thoroughly unqualified for the position other than formerly being a TV host on a gardening programme, revealed her ignorance in a recent press release where she stated among other mistruths that:

**1080 is very tasty and she apparently has it on her cornflakes every morning.

**Claimed there was a rat plague of “biblical proportion” in NZ forests.

**Suggested there was more 1080 in a cuppa tea than a pellet of concentrated sodium monofluoroacetate .

**Suggested a recent 1080 poison drop was beneficial to keas and rock wrens when most of the monitored birds actually died from eating the poison or disappeared presumed dead.

The press release did contain some important information in that she alluded to the presence of Man-Bear Possum when she stated, “If we don’t use 1080 to knock down predator populations, we’ll be facing extinction.” Ms Magpie’s bold public statements apparently incurred the wrath of Man-Bear Possum and he paid her an unannounced visit at her BeeHive office. (See photo below)

A frightened New Zealand Minister for Conservation Ms Barry Magpie is confronted by a disgruntled Man-Bear Possum in her Wellington Office.

Since the publication of this article, photos of Man-Bear Possums and anecdotes of contact with the elusive brute have been flowing in to The Rongolian Star newsroom.

Japanese traveller Yukako Kiyama happened across this footprint on beach along the West Coast section of the Heaphy Track. “I was terrified with frightening fear,” she said an headed for the first airport to catch a flight back to Tokyo. 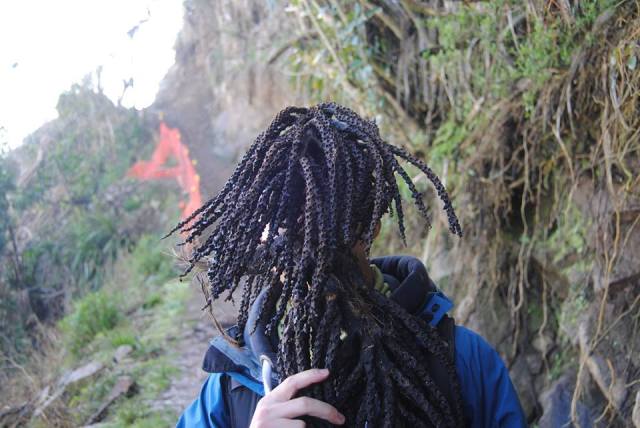 New Zealanders face a quandary, do nothing and let Man-Bear Possums live peacefully in their forest home, offer to accept them and reintroduce them into civilised society, or eliminate them with extreme prejudice…the jury is out folks, please let us know what thing in the comments section below and express your thoughts on this perplexing conundrum. 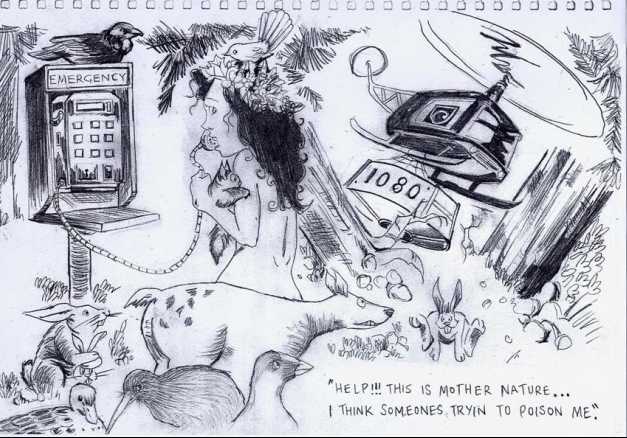 FootNote: The only mutant beast that in any way resembles Man-Bear Possum is Man-Bear Pig, which was discovered in by former U.S. Vice President Al Gore in the “Cave of the Winds” in SouthPark, United States. 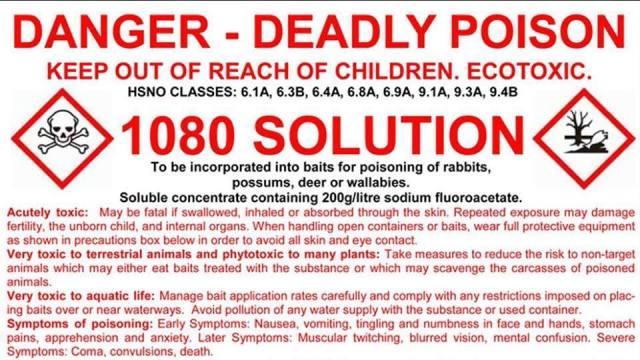