Posted on July 1, 2017 by LivinginPeaceProject 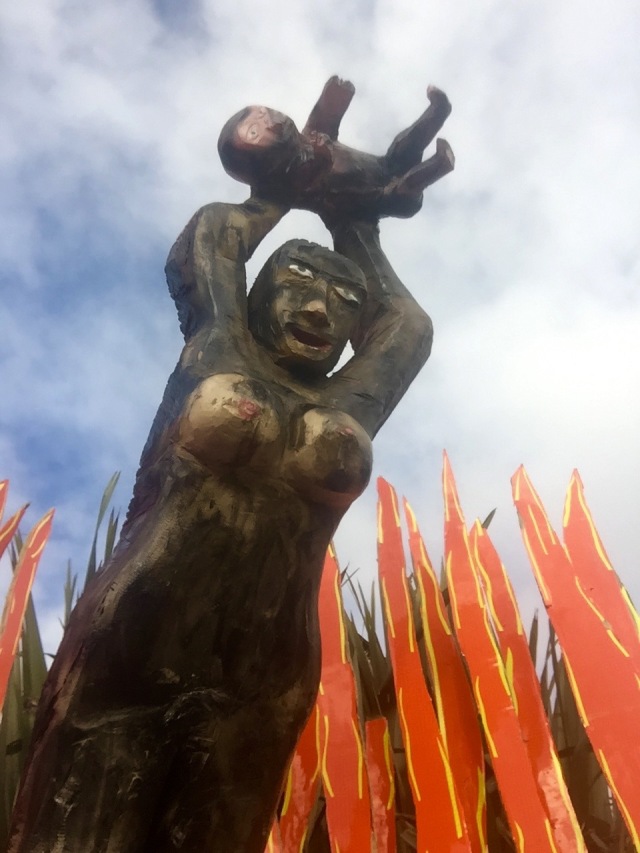 When a large macrocarpa tree blew down in front of his house in a storm, Granity artist and bon vivant Peter Whitaker saw it as a sign, “It was like a message from God,” he said with a wry grin.

God’s message was apparently to take the windfall and use it to disturb people. Good installation artworks often do, their message is strong and direct, they evoke emotion and stimulate contemplation. Pete Whitaker’s “Burning Woman Throws Baby” is such a bit of work.

The hideous and disconcerting sculpture is on display at Rongo in Karamea for six weeks and we invite you to come and take a look, have a think and try and determine just what the message Mr Whitaker is attempting to convey might be. It’s also a great selfie opportunity…because everyone looks good in front of this monstrosity.

Arthur’s Pass hostel owner and raconteur Bob Vaile (left) is never one to pass up a good selfie opportunity. He stayed at Rongo on his way to ride the Heaphy Track on his new full-suspension fatty and couldn’t resist a quickie with the unfortunate woman. 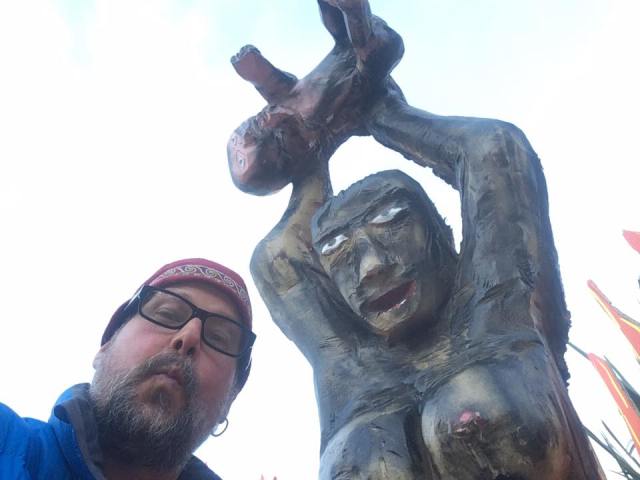 On seeing the sculpture for the first time, Rongo Manager Tristan Lockerbie said, “My God…That is a total waste of a good piece of firewood.” “It’s badly carved, poorly executed and completely disgusting…I LOVE it!”

Karamea Village Hotel Chef and local Barista Vinnie Dunford, couldn’t resist the opportunity to be photographed with the grim installation…”This is cheesier than double brie, mozzarella pizza with a cheddar infused crust….Mmmmmm CHEESE….,” He mused.

Chef and Barista Vinnie Dunford gets up close and personal with the flaming lady.

“It was motivated by despair really,” Whitaker said. “Despair with the state of the world, politics, the threat of global warming…It’s a message to say “Hey, things are really wrong here”…We need to think about saving the next generation.”

Whitaker carved the work for the annual Buller Art Exhibition in the clocktower in Westport on the West Coast of the South Island of New Zealand. The work didn’t elicit much feedback, but did result in one offer to purchase. “Someone wanted to buy it,” said Whitaker. “But I didn’t sell it as I was uncertain of the person’s intentions for the piece,” he added.

Diva Murray, daughter of Rongo owners Paul and Sanae Murray, was confused by the sculpture…”Why is the lady gorilla throwing a pig Daddy?” she asked. 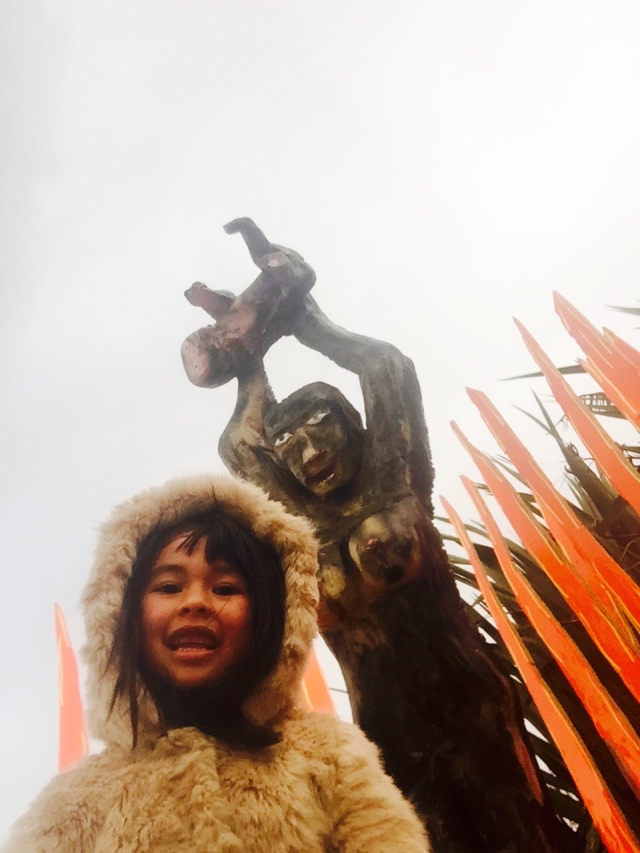 The anatomically incorrect shaping of the “hot” lady suggests it’s been quite a while since Whitaker has actually seen a woman without clothing and when pressed on the subject he said, “That may be true, but I have a lot of good memories.” Well memories are one thing, but mammaries are quite another and the Burning Lady’s misshapen chest suggests the unfamiliarity of the sculptor with the real thing…or things.

After the exhibition closed, mother and baby went on display in Westport at the Art Hotel in Brougham Street and they are now doing their time at Rongo in Karamea. Whitaker plans to take the burning woman and her unfortunate child down the West Coast and display them at other venues to spread the message and share the scare.

“Burning Woman Throws Baby” is on display at Rongo until Labour Day, so come and stay in Sunny Karamea and enjoy the stark contrast between the beauty and peace of Karamea life and the dystopian horror depicted in Whitaker’s artistic effort.

Take a selfie with the unfortunate lady as she desperately attempts to save her toasting toddler by tossing him out of the furnace of the present and into the frying pan of the future…and help spread the message that while things might not be so good now, there is hope for the age to come.