Published by Royal Decree since 1878

LOCIN a showy bay yearling colt by Peter out of June Hazel saw first light of day in Jinja, Uganda in 1955. A precocious head strong descendant of the Darley Arabian LOCIN aka Colin’s first day at school was in his neighbour’s back yard and involved basic Bush Craft Survival Techniques. A leopard came into the garden one day and ate a dog instead of the teacher as per instructions much to the annoyance of the little kiddies! Locin’s enraged father Peter shot the leopard and fed it to his pet budgie Pteradactyl.
Peter was District Labour Officer and in Tanzania was involved in the International Labour Organisation and was involved in TANU Tanzania National Union at that time Tanzania was a socialist/communist country.
Gardening was an exciting feature of Locin’s upbringing. A herd of hippos once came into the family garden and fell straight into the cess pit. Locin at 3 despite having a big stick was unable to keep them submerged without help so got assistance from one of his mates.
During the Dar Mutiny when he was in Dar Es Salaam––the Haven of Peace––local natives massacred Arabs for crimes committed over 300 years of injustice and piled up the dead bodies in Locin’s family’s garden under the coconut tree. Needless to say this organic mulch was just what the doctor ordered and the family coconut tree for many years after that produced spectacularly large camel flavoured coconuts.
His mother June Hazel harvested the coconuts by reversing the family Hillman Minx cabriolet into the coconut trees and dislodging quite a number of coconuts. On one occasion a coconut  fell through the roof of the car narrowly missing a trembling LOCIN. LOCIN became a little bit suspicious when his mother insisted he sit in the back seat every time she harvested coconuts.
At 4 he also noticed that the dish washing liquid June Hazel put in his muesli had a skull and cross bones on it. LOCIN started to really worry at 5 when June Hazel with LOCIN in the back seat drove with a cackling laugh after a herd of charging elephants that were going in the opposite direction.
LOCIN was made of tougher stuff and survived to see 17 and  climb Mt. Kilamanjaro (The Misty Mountain) in jandals.
Locins pedigree includes some very successful golfers. His brother Paul was  a club teaching pro and Paul’s son Andrew was a successful golfer winning the England Amateur Match Play Championship and had a successful career on the European Tour.
At 17 Locin’s first job was as a bookmakers clerk at the Bookmakers Club for William Hill at Epsom Downs Race Course. Placing a 10p x 57 bet Heinz x 6 race accumulator Locin picked four winners and collected a  Yankee worth 3 and half thousand knicker. Watched Appalachia win the 1972 Derby at Epsom Downs.  Living in SW18 LOCIN was an upmarket member of the West End Mafia. 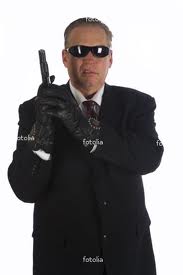 Young Locin Collects a Gambling Debt for an East London Bookmaker
Its’ like this see!! Last Monday Gypsy Warning I was in the Jack Tar down at The Frog ‘N Toad having a right Leo Sayer. There I was! Drinking a few Forsythe Sagas with Bonza me best China Plate.
Well strewth the Pitch and Toss from the local Cream Cookies gets me on the Dog and Bone!
Wants to know if I want to earn a Lady Godiva doin’ a Tina Turner! Wants me to collect a Macaroni from a Gerry O’Gorman Four ByTwo who’s done a Botany Bay after losing a John Major on a Bottle of Sauce at the Airs and Graces. So I thinks this Hillman Hunter is right Alan Border.
So I puts on me Weasel and Stoat and heads round Pat Malone to me Steve Claridge, grabs me a shooter, jumps in me Haddock and Bloater and heads around to his Rat and Mouse down in The Isle of Dogs.
Well Fuck Me! If his Trouble and Strife wearing nothing but her pink kippers and Eddie Grundies answers the Rory O’Moore. Didn’t even have a Master McGrath on to cover her saggy tits!! A right old Doug McClure this one. Used to be a Herring Kipper at a sleazy rub a dub in Soho.  Uglier than me old Kate Karney, she makes Draculas Bottle and Porter look like an apple pie. So I just about did a Wallace and Grommet right there on the foot step!
Anway it seems a Bottle Stopper from Uncle Wilf has just been round and her Fryin Pan is back in the Shovel and Pail doin Porridge! Seems Shylock is a right Stoke on Trent!
Cynthia takes me for a right Steam Tug and offers me a Gregory Peck to pay his tab. I says no way. Arthur Ashe or nuffin!! I knows he Coals and Coke. She must have thought I’m a Right old Lilley and Skinner. Anyways, so all this aggravashun is giving me Nuremberg trials the right Raw Tomato!
So I gets on the blower and organises for a few of me Garden Plates in Pokey to visit  Rubenstein in his Flowery Dell and give him a bit of how’s your father. I says to them make sure his bacon and eggs get a right old mutton pie, knock a few Hampstead Heath out of his North and South and give him a couple Oliver Twists on the Red Ruby. Costs me a score and I’m only making a Lady Godiva. A right old Jackie Brambles!!
Well anyways the Pitch and Toss is happy and so I heads round to The Dog’s Bollocks for a Brittney Spears and a plate of Kate and Sidney and Jack The Ripper! Strewth! Costs me all of Jack’s Alive Touch Me On the Knob!!
You can betcha the day Shalomoinker is Whale and Gale I’ll be doin a butchers down at his local Nearand Far. I’ll have his Family Jewels for John Skinner, get my Sugar and Honey back and have a right old Turkish Bath!
Locins most memorable moment was at Walton Heath Golf Course watching his father shoot a hole in one on a par 5. Peter shouted the bar but go so blotto that Locin had to pick up the tab after his father hid in his golf bag to avoid having to fork out for all the bludgers that celebrated his hole in one!
Colin was an extremely popular guest at Rongo and will be particularly welcome back on March 7th, which is official “Rongo Guests Dig Deep in Their Pockets and Shout the Wwoofers as Much Booze as it Takes for All and Sundry to get Completely Yogenberried Down at The Frog ‘n Toad Day.” Last year’s renewal was so successful that consideration has been given to set aside the month of Ramadan for a nonstop all out PISSUP!!
As a DJ on Radio Tanzania Locin and Patrick Huletes were the first to introduce Reggae into Tanzania. Locins favourite music is The Stones, Desmond Dekker, Led Zep, Dr. John Little Feet and Ska Rock Steady. The Rongo freezer is full of Kahawai thanks to Locins fishing expertise. So cheers mate!

Ocker Day is the day that celebrates King George III in 1788 buying all of Oz, excluding Tasmania, which still no one wants, for 2 six packs of VB, a McDonalds Worksburger voucher and a flagon of Meths!

Australia Day was celebrated in fine style at Rongo with an Aussie BBQ, the one and only 500th Blues show on Radio Karamea 107.5 FM and a fire in the Rongo Firepit. A fine selection of classic Oz Rock, Blues, Pop and Jazz was rudely interrupted by Bollywood Muzak as Rajah Tim (DJ Echo Echo Echo) celebrated India’s National Day. 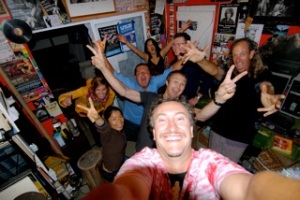 Then highlight of Ozzie Day was a rendition of Waltzing Matilda played over Radio Karamea on a miniature hand held organ.

What is Australia great for? Ozzie sportmen have the killer instinct and know how to put the hammer down and whenever they shaft any team of whinging Poms they know how to stick the knife good and deep give it a few twists and come away smiling!  Greatest Aussie of all time Sir Donald Bradman closely followed by Kazaly, Dennis Lillee, Banjo Paterson (no relation to Sir Les Patterson) and Yeah THOMMO!

Captain Cook and Black Douglas!! Guilty As Charged Your Honour!! 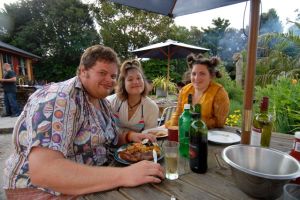 Duncan and Friends at Dinner: Rongo Backpackers (circa 2009)

Probably the most amazing act ever seen in Karamea The Orchestral Spheres entertained an exceptionally large crowd. Utilising a clever combination of original dance, off the wall home made musical instruments, clapping, chanting and lyrics The Orchestral Spheres caused many a heart to flutter with gay abandon!

The stand out was a rather ugly dwarf who doubled as a stand up comic. Whenever he stood up the audience genuinely and generously laughed at him!

“The most eccentric and avant garde act to hit Karamea since the 1929 earthquake.”

“I sincerely hope that the grey haired gentleman I saw leaving  the Karamea Village Hotel holding hands with The Dwarf has had his shots!!”