Posted on December 3, 2011 by LivinginPeaceProject 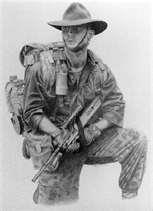 PERTH – An (Australian) SAS trooper collecting toys for children was stabbed when he helped stop a suspected shoplifter in east Perth.

The ‘Toys-R-Us’ Store Manager (Mr Smith) told ‘The West Australian’  that a man was seen on surveillance cameras last Friday putting a Barbie doll under his jacket at the store.

When confronted, the man became irate, knocked down an employee, pulled a knife and ran toward the door.

Outside were four SAS Troopers collecting toys for the “Toys For Tots” program.

Smith said the Troopers stopped the man, but he stabbed one of them
in the back. The cut did not appear to be severe.

The suspect was transported by ambulance to the Royal Perth Hospital with two broken arms, a broken leg, possible broken ribs, multiple contusions and assorted lacerations including a broken nose and jaw…Injuries he apparently sustained when he tripped as he was trying to escape after the stabbing.

One of the Troopers said, “He was a clumsy bastard.”