Posted on May 2, 2012 by LivinginPeaceProject

Time to Stop Worrying and Learn to Love Industrial Agriculture? 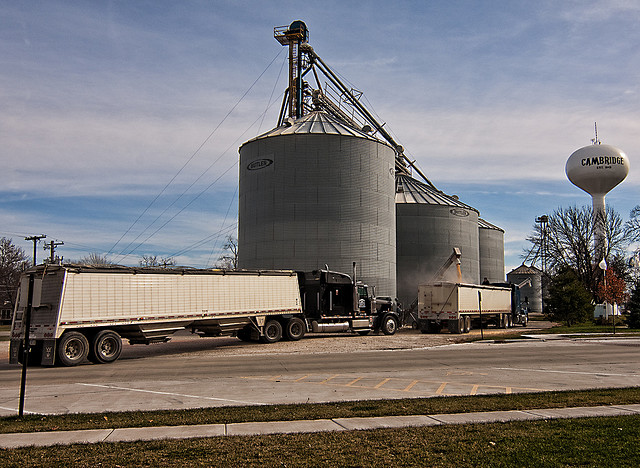 At a grain elevator in Illinois, corn is loaded into trucks, on the way to being turned into meat, ethanol, or corn syrup. Pete Zaria/Flickr

Like a good buffet, Nature‘s recent meta-analysis comparing the productivity of industrial and organic agriculture offered something for every taste.

For enthusiasts of large-scale, chemical-intensive agriculture, there was this headline finding: Yields on organic farming—the amount of crop produced per acre—are on average 25 percent lower than those of industrial farming.

And for biodiversity fans like me, the study had a caveat: Most of organic’s so-called yield penalty lies in grain crops like wheat; for fruit and some vegetables, organic ag is nearly (but not quite) as productive as its chemical-laced counterpart.

It was interesting to see how the story played around the web. Time‘s Bryan Walsh, who has been a critic of Big Food in the past, saw the study as the occasion to stop worrying and learn to love industrial agriculture—or at least marvel at its efficiency. “Whole Food Blues: Why Organic Agriculture May Not Be So Sustainable,” declared Walsh’s headline. “Conventional farming gets more and more crop per sq. foot of cultivated land—over 170 bushels of corn per acre in Iowa, for example—which can mean less territory needs to be converted from wilderness to farmland,” he wrote. (Parke Wilde of Food Policy has a good rejoinder to Walsh.)

Meanwhile, according to veteran New York Times climate reporter Andy Revkin, the Naturestudy actually makes a strong case for it. The paper points to a “hybrid path in agriculture,” Revkin wrote, one “incorporating both industrial-style production and organic practices where they make sense.” Given how relatively little land is devoted to organic ag both globally and here in the United States, Revkin’s reading would mean significantly expanding organic ag.

What do I take away from the Nature paper? I think it’s too narrow in scope to offer many insights at all.

First of all, it’s important to understand what the researchers did. They rounded up all the rigorously documented studies, both domestic and global, they could find that compared organic yields and conventional yields (66 studies met their criteria) and averaged them out. The only focus was gross output per acre—no consideration of, say, ecological trouble likethe plight of honeybees and other pollinators in a sea of pesticide-laced crops, or resources consumed, like synthetic nitrogen fertilizer, which is made with natural gas. So, despite what Walsh wrote, the study didn’t really tell us much about the relative efficiency of the systems beyond output per chunk of land. Viewed through the study’s yield-per-acre lens, industrial agriculture looks hyperefficient, and organic like a laggard.

And indeed, big farms in Iowa—the example Time‘s Walsh pointed to—do produce mountains of corn per acre. But dig a little deeper, and the picture muddies. The authors note that conventional ag produces high yields through abundant use of synthetic nitrogen fertilizer. But they don’t account for the fact that nitrogen runoff from farms generate also contributes to a massive annual dead zone that snuffs out a swath of what should be a highly productive fishery in the Gulf of Mexico. Such externalities, as economists call them, are not accounted for in the study.

Moreover, the study’s fixation on yield puts a shiny gloss on a system that actually wastes huge amounts of resources. Let’s take corn again. According to the National Corn Growers Association (NCGA), more than a quarter of US farmland, around 90 million acres, is typically planted in corn, more than any other crop. US corn agriculture is indeed productive—our farmers churn out about 40 percent of the globe’s entire corn crop each year. If the aim was to use those calories efficiently, we’d focus on consuming them directly—in, say, the form of corn bread, polenta, tortillas, or cereal.

How much do we consume directly of this bountiful crop? According to NCGA’s figures from 2010, less than 2 percent. More than 40 percent of it goes into the mouths of animals we then consume, in the process squandering huge amounts of resources. According to Earth Policy Institute, it takes seven pounds of grain to produce a pound of beef—the rest is lost to the huge parts of the carcass we don’t consume. Pork and chicken are more efficient, but it still requires four pounds and two pounds, respectively, of grain to produce a pound of their meat.

Another third of the corn crop or so goes to ethanol, bypassing our stomachs and gushing into our gas tanks instead (and delivering little or no net energy in the process). Nearly 20 percent is exported to other countries, mainly as livestock feed. The rest goes into products like high-fructose corn syrup and other sweeteners—leaving, again, just 2 percent for direct consumption.

Keep in mind, as you ponder the frivolous uses to which we put our biggest crop, that US corn is a massive user of agrichemicals. Using gross yield as a lens to judge the efficiency of our corn crop is like gauging the health of a steroid-addled bodybuilder by measuring his biceps.

Moreover, by focusing on yield, the authors presume that maximizing production should be the chief goal for ag policymakers. But as the eminent agriculture development expert Hans Herren, president of the Millennium Institute, told me, the globe’s farms are already producing 4,600 calories per day—enough in gross terms to support a population twice as large as the current one.

“We don’t need to grow more food, we need to shift what we grow, where we grow it, and who grows it,” Herren told me. He said that in places like Africa, East Asia, and South America, crop yields could be doubled “almost overnight” if farmers had the training and infrastructure to proper organic and/or low-input farming. Their crops yields might still lag behind, say, those of industrial-scale corn farmers in Iowa. “But they wouldn’t need all of those inputs [like fertilizer and pesticides], and they’d produce more than enough food,” he said. As for the United States and Europe, “they would do well to grow less food and focus more on things like improving quality and building soil.”

And even in terms of gross yield per acre, the Nature study might be misleading. Matthew Dilllon of Seed Matters, an expert on organic seeds, reminded me that seeds play a huge role in determining yields. Conventional farmers use seed varieties that are well adapted to great lashings of synthetic fertilizers, pesticides, and irrigation water, bolstered by decades and billions of dollars in research, much of it publicly funded. The availability and quality of seeds bred for organic farming is improving, but organic seed research remains in its infancy. “Most organic farmers are [still] using seed bred for conventional systems, or seed that has not been improved at all,” Dillon wrote.

Dillon pointed me to research from a team at Washington State University looking at the yield effect of using seeds adapted to organic agriculture. The study authors looked at wheat—a crop that the Nature paper identified as one that badly lags in yield for organic producers. They found organically managed fields planted with adapted seeds delivered yields as high as 31 percent over similar fields planted in unadapted seeds. Their conclusion:

With crop cultivars bred in and adapted to the unique conditions inherent in organic systems, organic agriculture will be better able to realize its full potential as a high-yielding alternative to conventional agriculture.

This raises a key issue: the paucity of funds we invest in organic research. According to thelatest numbers I’ve seen, 4 percent of the food consumed in the United States—and 11 percent of the fruits and vegetables—is organic. How much of the USDA’s research budget is devoted to organic research, including projects like developing proper organic seed lines? Less than 1 percent, the National Sustainable Agriculture Coalition Ferd Hoefner recently told me. The other 99 percent goes to industrial ag—yet another de facto public subsidy to the agrichemical industry.

I fear that a lot of policy makers and pundits will glance at the Nature study and conclude that at least the agricultural part of our food system isn’t broken and doesn’t need fixing. They’re wrong.

Paul Murray is the founder of the LivinginPeace Project. www.livinginpeace.com Paul originally from Australia, but have been living in New Zealand for 14 years. Before that he was in Japan for a decade working as a journalist. He met his wife Sanae in Japan and they married in 2008.
View all posts by LivinginPeaceProject →
This entry was posted in Agriculture and tagged Agriculture, Corporate, Food Production, Industrial, Organic, Permaculture. Bookmark the permalink.