Posted on December 8, 2012 by LivinginPeaceProject

The Tauranga naturist who won his appeal against a conviction of offensive behaviour for running naked through Oropi Bike Park last year is planning a second nude bike ride through Papamoa.

Andrew Pointon, a naturist for more than 20 years, is planning a second attempt at World Nude Bike Day on March 9 next year.

Despite relatively low attendance last year, the 47-year-old is hoping to double the numbers of nude bikers for the event from Omanu Beach to Harrisons Cut in Papamoa to promote the message – ‘riding bare for clean air.’

“We are not burning oil, we are burning fat,” says Andrew.

Andrew caused quite a stir in March when he organised the nude bike ride coincidently running the same day as a surf lifesaving event.

“You have got to start somewhere and just work on it and get the message out. I am hoping to double the numbers for next year and hopefully the year after.”

In December Andrew was found guilty of one charge of offensive behaviour in Tauranga District Court.

The charge related to an incident in August when Andrew was running through a forest naked with just his sneakers on. He was spotted by a woman walking her dog who found the act so offensive she laid a complaint with police.

Andrew went on to appeal his conviction, which was thrown out in June. On Friday, Justice Paul Heath upheld a second appeal in the High Court at Tauranga.

He says some people are offended at the sight of ‘genetalia.’

“When people see genitalia they think of other connotations that are linked to it and they don’t really step back and say it’s just mere nakedness.

Andrew says he and Free Beaches New Zealand – a society that protects the rights of naturists – spent about $10,000 on court costs during his appeals.

“It had a chilling effect on the freedom of expression. It’s a decision which brings some balance back into the debate and shows that we are becoming an increasingly tolerant society of diverse ranges of the people that make our society so interesting to live in.

“He (Andrew) went out of his way in essence to use the public space in the way he wanted but taking into account the rights and needs of other. So he was sympathetic.” 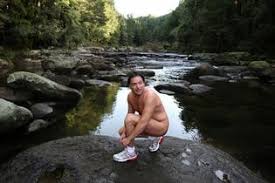 Paul Murray is the founder of the LivinginPeace Project. www.livinginpeace.com Paul originally from Australia, but have been living in New Zealand for 14 years. Before that he was in Japan for a decade working as a journalist. He met his wife Sanae in Japan and they married in 2008.
View all posts by LivinginPeaceProject →
This entry was posted in Environment, Funny, Hilarious, Humor, Mountain Biking, MTB, New Zealand, Satire, Social Commentary and tagged Andrew Pointon, Cycling, Jogging, Naked, Naturalist, New Zealand, Nudist. Bookmark the permalink.