Another Busy Day for the Old Baked Bean

Posted on May 30, 2012 by LivinginPeaceProject

Her Majesty Elizabeth II, by the Grace of God, of the United Kingdom, New Zealand and Her Other Realms and Territories Queen, Head of the Commonwealth, Defender of the Faith on the throne since 1953

Newly Crowned Queen Elizabeth II on the throne in 1953

The Old Baked Bean Doing a Spot of Gardening

The Queen with Fans

The Queen Learning to Dance 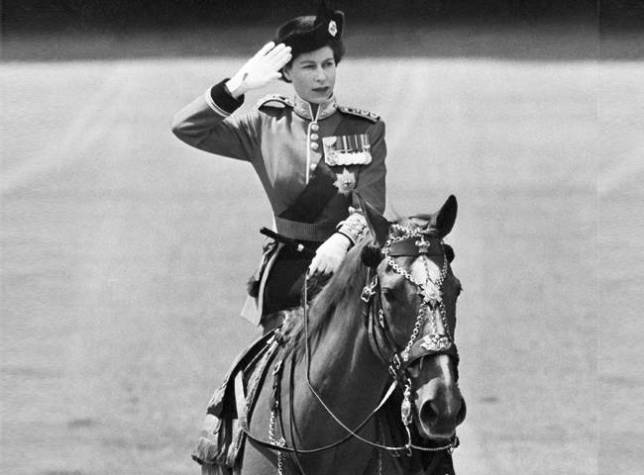 The Queen: Down with the Homies

Commando Queenie (Inspecting the Officers and their Privates) 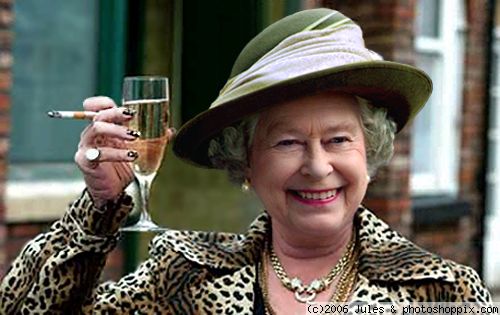 * Elizabeth is the Queen of the United Kingdom, Canada, Australia, New Zealand, Jamaica, Barbados, the Bahamas, Grenada, Papua New Guinea, the Solomon Islands, Tuvalu, Saint Lucia, Saint Vincent and the Grenadines, Antigua and Barbuda, Belize, and Saint Kitts and Nevis.
* Her Magesty’s height is is 5′ 4″, she is fluent in French, and her nickname is Lillibet.
* Her Magesty was made a Honorary Fellow of the Royal College of Obstetricians and Gynaecologists, in 1951.
* Forbes magazine estimated her fortune at around $500 million.
* Although Elizabeth officially lives in Buckingham Palace, she, like many other British monarchs before her, dislikes the Palace and she considers her home to be Windsor Castle.
* Elizabeth appeared on the cover of Time magazine, in 1929, at the age of 3. In 1952, she was on the cover of Time magazine again, this time as Person of the Year.
* She was the first British monarch to circumnavigate the globe in one trip.
* Elizabeth was the first and the only female member of the royal family to serve in the armed forces, in the Auxiliary Territorial Service.

Paul Murray is the founder of the LivinginPeace Project. www.livinginpeace.com Paul originally from Australia, but have been living in New Zealand for 14 years. Before that he was in Japan for a decade working as a journalist. He met his wife Sanae in Japan and they married in 2008.
View all posts by LivinginPeaceProject →
This entry was posted in Historical, Humor, Humour, Parody, Satire, Social Commentary and tagged British Monarch, British Royal Family, Funny, Hilarious, Humor, Humour, Parody, Queen, Queen Elizabeth II, Queen of British Empire, Satire. Bookmark the permalink.